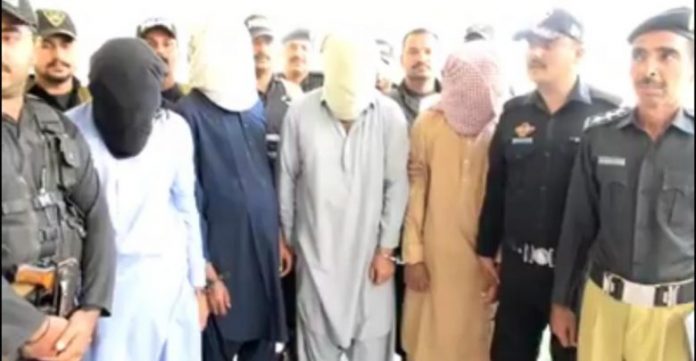 PESHAWAR: Four days after Sindh Chief Minister assured the Bajaur Political alliance that justice will be done, Larkana Police have nabbed four accused in Bajaur labourers murders case. On Monday, the accused were presented before the media during a press conference in Larkana police station, where Superintendent of Police Masood Bangash briefed media about the ongoing investigation into the triple murder case.

The district Police head informed that a total of five persons are involved in the brazen murders out of which four has been arrested. The names of the arrested accused are Hazar Khan Kehr, Irfan Kehr, Sajjad Agani and Loqman Phalpoto while the search for the arrest of another accused Badshah Shaikh is still underway.

The SSP revealed that the arrests were made on the bases of CCTV camera footage and the examination of their mobile phones data. The SSP said that preliminary investigation has revealed that the motive behind the killings of poor labourers is to create ethnic rifts in the country.

The SSP also said that they have recovered the motorcycle and weapons used in the murders from the possession of arrested accused. The Police officer informed that all the four accused were also found involved in such gruesome murders in the past and they have confessed their crimes. The Larkana police chief revealed that there is also evidence that they were controlled and assisted from across the border in Afghanistan.

Three labourers from Bajaur were gunned down in Larkana district of Sindh province during the night by unidentified assailants. Those gunned down in the incident were identified as Rais Khan, Waheed Gul, and Arab Gul all the residents of Utmankhel area of Bajaur. The triple murder sparked protest in Bajaur, where hundreds of people gathered and demanded the government to investigate and grant an exemplary punishment to the culprits.