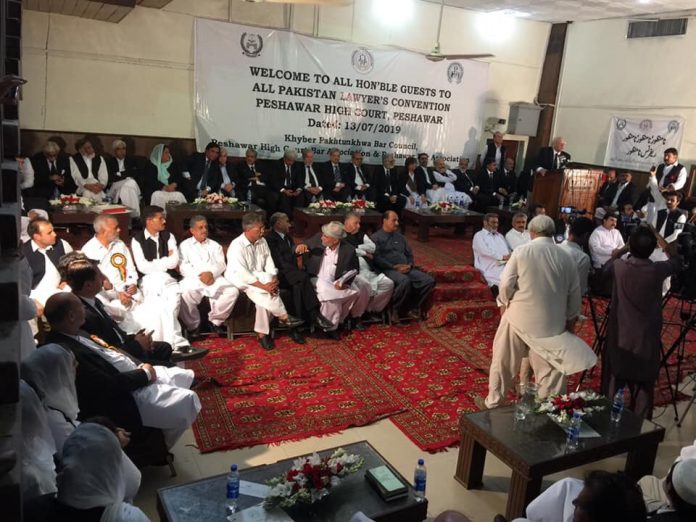 While addressing the gathering, Abdul Latif Afridi, the president of Peshawar High Court bar association said that the convention is not against any institution but it has been arranged for the Supremacy of law and independence of the judiciary in the country. “The references against senior judges have not been filled in good faith, we want its withdrawal at once,” Afridi demanded. “We want the rule of law and the independence of the judiciary,” he added.

The President of PHCBA association said that the currently the judiciary is under severe pressure. He added that the lawyers across the country have to come together to fight for the freedom of Judiciary. He expressed the hope that the Supreme Judicial Council will discard the references filed by the federal government against both the judges.

The former president of Supreme Court Bar Association Yasin Azad said that the if Supreme Judicial council granted verdict against the two judges, it will have very negative impacts on the freedom of judiciary.  He asked the federal law minister to work for strengthening the institutions instead of filling references against judges.

Hamid Khan, the former president of Supreme Court Bar Association said that the lawyers in Peshawar have taken the first step of bringing together lawyers from across the country. Hamid Khan added that it is a good omen for Supremacy of Judiciary. He added that the government wouldn’t have been able to file references against the judges if lawyers have shown unity when the action was taken against the former Islamabad High Court Judge Shaukat Siddiqui.