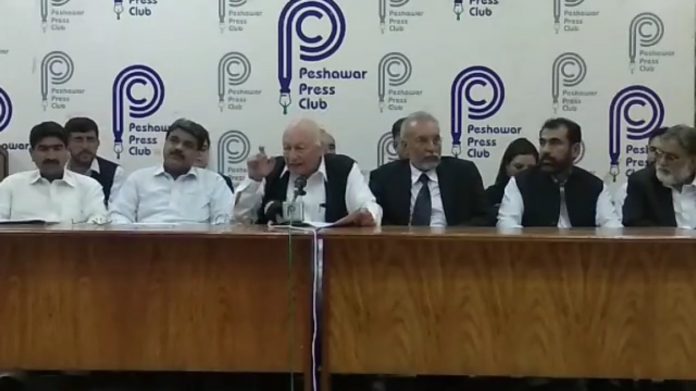 PESHAWAR: Lawyers in the province to observe a complete boycott of courts’ proceedings on Saturday against the alleged violation of rule of law and constitution in the country. The all Pakistan lawyers’ convention will also be held in Peshawar in which lawyers from across the country will participate.

“The convention is for the rule of law, the supremacy of the constitution, strengthening of state institutions and independence of the judiciary,” said Abdul Latif Afridi, the president of Peshawar high court bar association while addressing a news conference at Peshawar Press Club.

The lawyers said that references were prepared against Qazi Faez Isa and Justice K.K Agha however the lawyers believe that both the judges have been targeted for their honesty and efforts for the independence of the judiciary. “We want the judiciary to be free and until it is not free, there will be violations of the constitutions and democratic system,” said Afridi. He said that convention will demand the government to immediately withdraw references filed against both judges.

He added that lawyers believe that all the institutions should work under their constitutionally assigned powers. Afridi added Hamid Khan Group, Ali Ahmad Kurd, Yasin Azad group and the president of all bar councils from the country are coming to the convection which means that the lawyers throughout the country are united.

The lawyers also condemned the press censorship and alleged threats to journalists in the country and said that they are ready to help journalists in legal matters to ensure freedom of the press in the country. “The convention is not against individual or institution, its only aim is to press the government to make all decision according to the law and constitution of the country,’ said Latif Afridi.