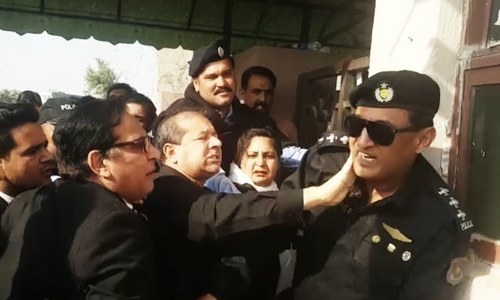 PESHAWAR, 13 October: An accountability in Islamabad could not indict ousted prime minister Nawaz Sharif’s daughter Maryam Nawaz and her husband Captain (retired) Safdar in corruption references as PMLN’s lawyers created mayhem in the court and forced to judge to adjourned the hearing.

The accountability court on last hearing, had summoned Nawaz Sharif, Maryam Nawaz and Captain (retired) Safdar for indictment in the NAB references filed against Sharif’s family. The former prime minister did not appear in court as he was in London to look after his ailing wife who is undergoing cancer treatment.

Strict security arrangements were put in place. As the accountability court judge, Muhammad Bashir, entered the courtroom, members of legal fraternity associated with PMLN tried to enter the courtroom. They were stopped by the police and other security personnel which led to a scuffle between the lawyers and police.

As the hearing started, the lawyers began protesting inside the court. They surrounded the judge’s bench and complained that they were manhandled by security forces outside the court and prevented from entering the courtroom.

The lawyers threatened to hold up the hearing until action was taken against the police officials who had allegedly manhandled them.

According to media reports, a female member of the NAB prosecution team was also injured in the scuffle. ors ion team

The lawyers’ commotion forced judge Muhammad Bashir to leave for his chamber. He asked the defendants to leave the courtroom and the proceedings till October 19.

Nawaz Sharif, Maryam Nawaz and Captain Safdar will be indicted on the next hearing.

Talking to media persons outside the courtroom, Maryam Safdar said that the lawyers were forcibly stopped from entering the courtroom despite that fact it was an open court hearing. She said she would ask the Interior Minister to probe the matter.

Meanwhile, PTI Chairman Imran Khan reacted to the situation and accused PMLN of attacking the judiciary.

“Today the PMLN attacked Pakistan’s judiciary for the second time – today it was to protect the over Rs 30 b Sharifs’ loot stashed abroad,” Imran Khan tweeted.