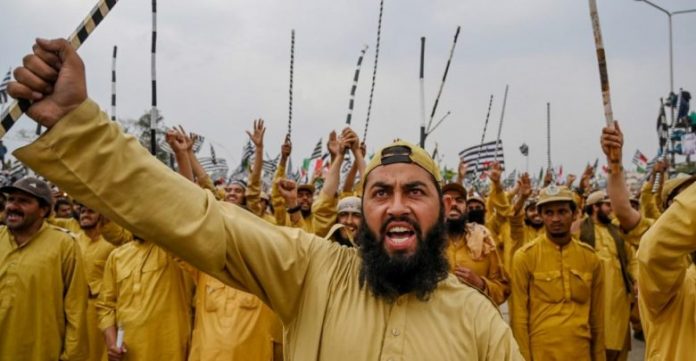 PESHAWAR: Adviser to Khyber Pakhtunkhwa Chief Minister on Elementary and Secondary Education Ziaullah Bangash has revealed that the leader of Ansarul Islam, the baton-wielding force of Jamiat Ulema-e-Islam (JUI-F), Afsari Muhammad, is a teacher at a government school.

Ziaullah Bangash said it was a matter of disappointment that a schoolteacher, who is supposed to build the future of students, is participating in a political gathering while leaving his duty for which he is drawing salary. He said there is shortage of teachers in tribal districts, while the said teacher, instead of focusing on education of students, has become the leader of a baton-wielding force.

Meanwhile, the Fair Testing Service (FTS), a private testing agency, has issued fresh schedule of written test for the posts of primary school teachers (PSTs) in the Elementary and Secondary Education Department. The tests were previously scheduled on October 27, but were postponed due to political situation in the country, particularly in Khyber Pakhtunkhwa, due to the Azadi March of the JUI-F. According to the new schedule, the tests will be held on November 17.

The FTS has been given contract by the KP government for appointment of about 5,000 teachers in some districts of the province. However, the testing agency is finding it difficult to arrange the tests in a transparent manner and complaints of mismanagement are rife. Previous tests conducted by the FTS for various teaching posts were cancelled by the KP government and it was announced that fresh tests on these posts will be held within 15 days. However, no such announcement has been made by the FTS and even two months after the cancellation of certain tests, the applicants don’t know when these tests will be held again.