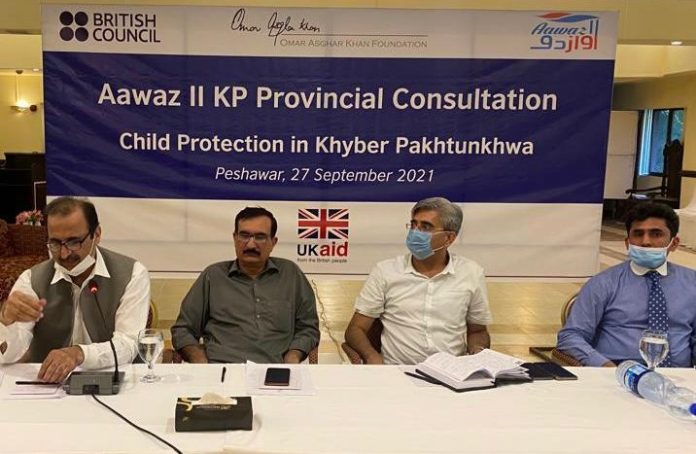 “Aawaz II is strategically placed to provide this support through its tiered presence and interventions at the district and sub-district levels,” said Zulfiqar Ali Shah, KP Secretary for Social Welfare and Women’s Development.

He was speaking at a Stakeholder Consultation on Child Protection organised by Aawaz II. More than 100 civil society activists, journalists, and academics from 11 KP districts, including merged areas, actively interacted with government officials at the event. Specifically, talking about the Child Marriage Restraint Bill that is under consideration, the secretary explained that the law passed in 1929 was being updated. As per instructions from KP Chief Minister Mahmood Khan, efforts are being made to involve all relevant stakeholders to finalise the bill and present it in the KP Assembly for passage.

“1121 Helpline has been set up and Child Protection Units are functional in 19 KP districts, including seven in the merged areas, to help citizens access the Commission for redressal of child abuse,” he said.

Ijaz Khan encouraged public utilisation of available services so that the Commission is able to serve them better.

Imran Takkar, Co-Chair of Aawaz II KP Provincial Forum and a well-known child rights’ activist, pointed out four issues related to child labour. The first was the need for credible data, especially considering the impact of COVID 19. Secondly, he emphasised the need to pass subsidiary legislation (including rules and regulations) and allocated budgets so that laws can be implemented, lastly, he pointed out the need for effective monitoring.

Director Labour for KP Irfanullah Khan announced that the KP government was working on a Child Labour Survey. Its field data collection will begin on 1 October, 2021. He also shared that the rules of business for the KP Prohibition of Employment of Children, Act 2015 have been prepared. Responding to a question raised by many participants, Mr Khan explained that the survey will provide data on children forced into labour due to economic pressures. If these cases are within a manageable scale, there is a possibility of providing social protection through programmes like Ehsaas, for families that lose income from a child employed.