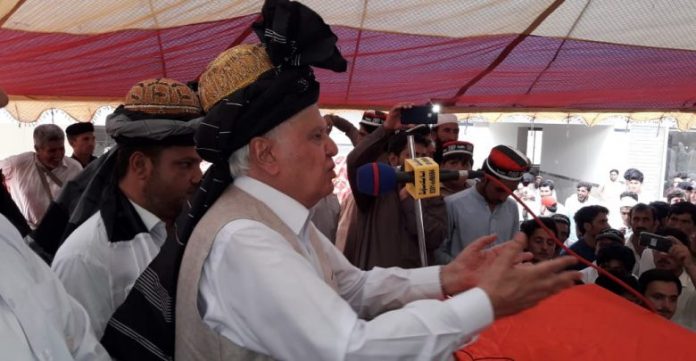 GHALLANAI: The Qaumi Watan Party (QWP) chief Aftab Ahmed Khan Sherpao said on Saturday that reforms in tribal districts must be implemented in true letter and spirit to bring the people of the area into the national mainstream.

Addressing a party rally in Prang Ghar area of Mohmand tribal district in support of the party candidate from PK-103, Sherpao said his party opposes deployment of the Army personnel inside sensitive polling stations during elections in tribal districts. He said his party believes that elections must be held fully under the civil administration to ensure free, fair and transparent elections. He said deployment of military personnel inside the polling station will raise questions about transparency.

The QWP chief said all the political parties must get equal treatment in electioneering in tribal districts as provincial elections are being held in the merged districts first time in the history of the country. He said his party wants development of tribal districts through its own representatives in the Khyber Pakhtunkhwa Assembly. He said health, education and all other facilities must be provided in tribal districts, which is the basic right of the area people.

Sherpao said the Pakistan Tehreek-e-Insaf (PTI) has increased the difficulties of the tribal people after the merger. He said the government has failed to handle the police and judicial system in merged districts properly.

Sherpao said the PTI government has kept an enormously large cabinet which is a burden on national exchequer. He said the incompetence of the government could not be concealed despite such a large cabinet.