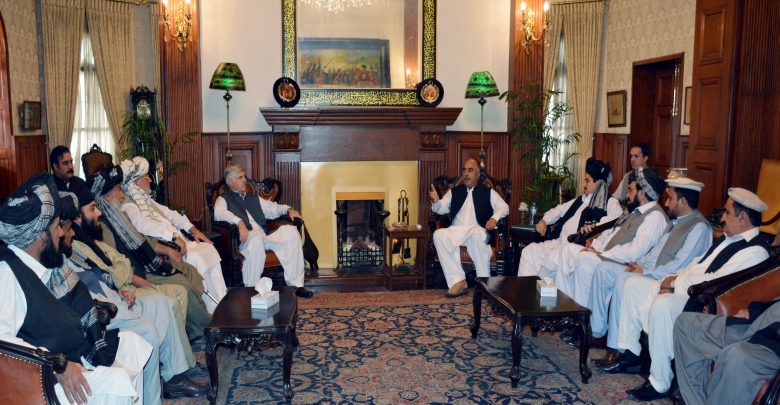 PESHAWAR: Governor Khyber Pakhtunkhwa Shah Farman said on Sunday that Prime Minister Imran Khan was well-aware of problems of tribal people and would soon announce a huge development package for their development.

He added that the erstwhile Fata would be soon be added to the list of developed parts of the country. He expressed these views during a meeting with a delegation of tribal elders from North Waziristan district. Chief Minister Mehmood Khan was also present on the occasion.

The governor expressed condolences over the tragic death of SP Tahir Khan Dawar and offered faith for his departed soul.

The delegation exchanged views with the governor over merger of tribal areas with KP and presented some recommendation for better implementation of the reforms.

The governor said that main objective of Fata-KP merger was to respect the basic constitutional rights of the tribal people and mainstream them.

The delegation was assured that not a single personnel of Khasadar and Levies personnel would be expelled from his job and promised to that funds would be spent transparently.

Among the participants were anti-merger Malik Khan Marjan , Malik Nasirullah Wazir, Malik Shajehan Wazir and others.