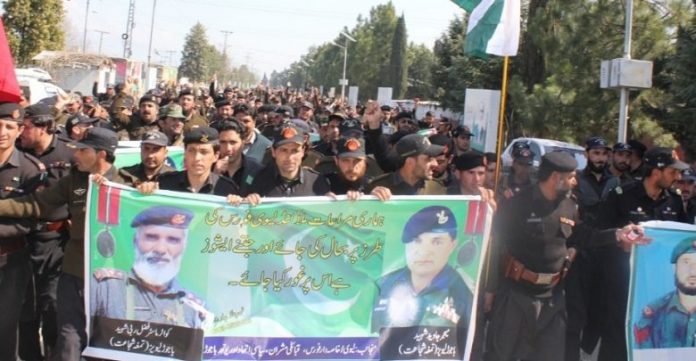 KHAR: The personnel of levies force staged a protest rally here on Wednesday against the police deployment in the tribal districts until their demands of merger with the police department and equal privileges are not fulfilled.

They expressed concerns over the delay in solution to their demands pertaining to release of salaries, reinstatement of the sacked employees and threatened to block entry of police into the tribal districts if their demands were not met.

Carrying banners and placards inscribed with their demands, the protesting personnel of Levies force gathered outside the Levies lines and marched to the Headquarter hospital. They urged the government to materialise its commitment with them and merge the force with Khyber Pakhtunkhwa police.

They said that thousands of personnel of Levie force were performing duty in different tribal districts but government was using delaying tactics to accept their demands. The protesters said they fully support tribal districts merger with the province but they have apprehensions which the government must address.

The merger of erstwhile Fata with KP, they said, was appreciated by people as they got rid of the black laws of FCR but it did not mean to deprive personnel of Levies forces of their livelihood.

They demanded the government of salaries and other privileges at par with the KP police for levies performing duties in Malakand and all the tribal districts of the province. The asked the government to refrain from deploying police without addressing their demands otherwise, they will not be following discipline and will start protests if our demands. The protesters revealed that all the tribes living in Bajaur will oppose the deployment of police in the district until the future of levies are decided and they aren’t taken into confidence.

The participants of the protest said that the levies forces despite insufficient resources have fought of decades to maintained peace in tribal areas. Now it is the time their sacrifices are recognized by both the federal and provincial governments.