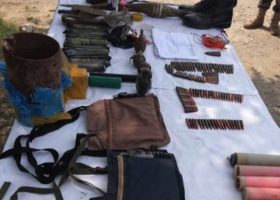 BAJAUR: Bajaur Levies force’ Bomb Disposal Squad has foiled a terrorism bid in Bajaur tribal district by recovering a big cache of weapons in Mamond Tehsil on Wednesday. An official of the local administration told the media that the weapons were recovered in Nimat Khan Kally area by a team of Bomb disposal squad of Bajaur Levies forces.

Following information received from the local about the presence of weapons in the area, the official said a team of Bomb disposal squad was sent there. He said that rocket launcher, rocket shells, fuses, smokes and mortar shells were among the seized weapons which were later shifted to Levies Line in Khar.

‘KP to hold Dialogues with tribal elders to remove their reservation regarding merger process.’

PESHAWAR: The Chief Minister, in a meeting with high officials, has directed to hold dialogues with tribal elders remove all their reservations. The CM said that they would be properly contacted and informed about the decisions of government regarding the merger.

It was said that dialogue with tribal people would be initiated from northern districts including Bajaur, Mohmand, Khyber and others.

Speaking on the occasion, KP CM directed provincial departments to expedite the pace of merger and initiating steps for inducing development and progress in these areas. He said that the matter should not be taken casually as the government is determined to bring positive change in lives of merged district’s citizenry.

Chief Minister directed to accelerate the process of dialogue while taking the provincial ministers on board and said that they would soon be provided with a schedule for the purpose. CM said that the services of Levies and Khasadar are being given protection by introducing an ordinance. He also sought progress of formulating rules under the new laws of the government and establishment of new departments.

Mehmood Khan also directed ministers to review the progress made on the decisions of the cabinet to increase the efficiency and productivity of the concerned department.