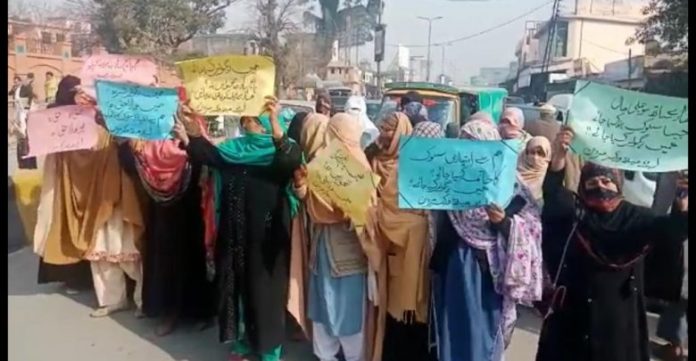 MARDAN: Flaying the Khyber Pakhtunkhwa health department and district administration Mardan, the lady health workers on Monday asked for the release of their five months salaries forthwith otherwise they would boycott upcoming drive against polio virus in tribal areas.

“We have been working for the last five years, but still the government has not regularized our jobs,” said an LHW, who was among the protesters. She added they have been working in a very difficult situation and even facing security threats during the anti-polio vaccination, but in return, the government officials aren’t even ready to pay them salaries.

She warned that they will have no option but to boycott the upcoming polio drive if their issues were not resolved.

The LHWs  also chanted slogans against the Pakistan Tehrik-e-Insaf (PTI) government for not paying attention to the issues being faced by lower ranking employees.

They informed reporters that they had been offering services and performing duties in different health units in Mardan for the last five years but the ‘incompetent authorities’ have not paid them for the last five months due to which they are under great economic pressure.

Regarding the authorities concerned, the LHWs said they’ve submitted written applications in this regard but no attention was paid to the resolutions of their issues. Because of the unpaid salaries, the protesters said they are facing various monetary problems and that their troubles in the last few months have doubled.

The angry LHWs threatened to boycott the upcoming campaign against polio virus across the district if their due salaries were not paid on time.