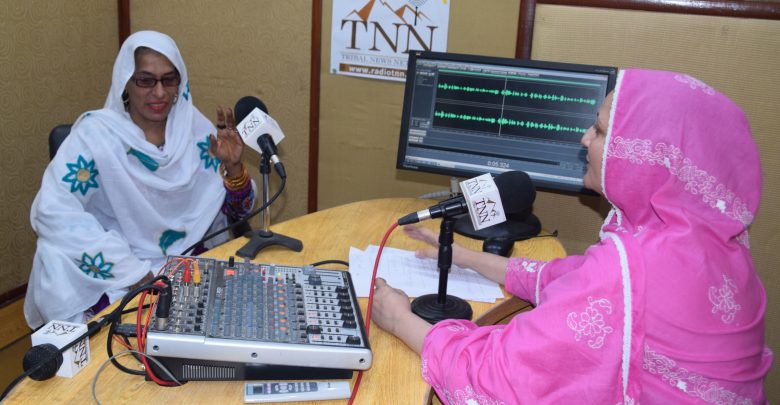 PESHAWAR: For Pashto singer Wagma only thing better than singing is more singing which is she still want to sing had illness not taken away her energy.

Talking to Tribal News Network, Gul Zari alias Wagma, breaks in tears while recalling her past when she was at the peak of her career, and said she has 2,500 albums to her credit and is recipient of 200 local awards.

She was born in Menai village of Swabi district and shifted to Peshawar in 1995 after marrying to Liaquat Ali Khan Yousafzai, a local stage shows producer.

Wagna has represented Pakistan in China, Syria, Qatar, Dubai, Iran and Afghanistan. She earned the title of second Gulnar Begum, a top folksinger of the yore days.

Hailing from Swabi district of Khyber Pakhtunkhwa, she had undergone a surgery after which she suffered various health complications including diabetes, kidney problem and a tumor that had taken a toll on her voice and energy and finally forced her to quit her profession.

“I have finally recovered from all illnesses and I am grateful to Allah Almighty that he has forgiven my sins,” she said.

She amassed fans around Pakhtunkhwa and Afghanistan because of her soothing voice. She rose to fame after singing “Na me dilbari na dildari ukra” at a wedding ceremony in Swabi.

The ghazal was liked throughout Pakhtun belt on both sides of Durand that given her a chance to start her career as singer. “Since then, I have sung for 40 years,” she said, adding that she was gifted with such a beautiful voice that she never consulted a teacher.

She performed in open air concerts, functions, sung for films. There was a time when I owned three houses in posh areas and 850 tola gold, she said.

Jaba me kra prekra za ba pa khkara wayam was her debut song for Pashtu film Kochai. She could not continue singing for films as new people started singing due to which competition increased.

She criticised Pashtu films’ songs for its poor quality and boring music. She says she would never sing such songs even if producers agree to pay her double. “I sang for Pashtuns throughout my career and preferred quality over quantity,” she commented. It is because of my good voice and quality that people still hear my songs in hujras and even homes.

She likes Sitara Younis and Nazia Iqbal among female singers, for they are gifted with soothing and melodious voices. Sitara and Nazia had started their career from singing and rose to fame because of their hard work. “Most of Pashtu singers, now-a-days start their career as dance and then become singers without any practice and hard work,” she said.

She expressed disdain stressful and disturbing voices of the new comers. She has many students but Nazia Iqbal is the one who she felt proud of. Wagma is mother of six, four sons and two daughters. One of her daughter passed away recently. Her children never love music as profession. “Ups and downs are part of life,” she said, and was grateful to Allah Almighty for all blessings, health and wealth.

The government had given her Rs0.5 million apart from financial help from friends and relatives. She was also grateful to all her for enquiring about her health.