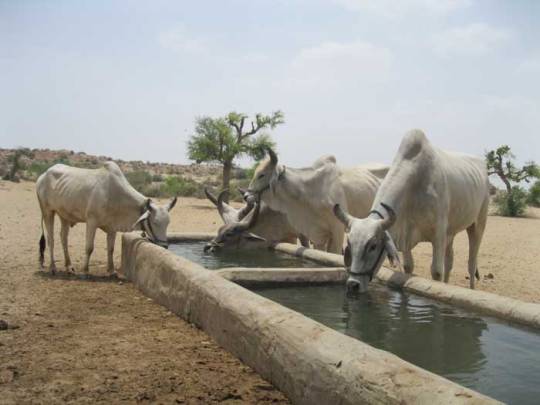 THARPARKAR: Livestock and Fisheries department of the government of Sindh launched the PPR vaccination drive in district Tharparkar today. Mr Abdul Bari Pitafi, the provincial minister for livestock and fisheries launched the campaign in collaboration with the Food and Agriculture Organization of the United Nations (FAO).

The campaign is part of the response to the drought in Tharparkar. The vaccination will prevent livestock loss against Peste des petits ruminants (PPR) disease also known as ‘goat plague’. It is a viral disease of goats and sheep characterized by fever, sores in the mouth, diarrhoea, pneumonia, and sometimes death.

Emphasizing the importance of animal health for Tharparkar, Mina` Dowlatchahi FAO Representative in Pakistan said the vaccination will help ensure healthy livestock which will be instrumental in ensuring food security and sustainable livelihoods for the already drought stressed communities in the area.

She also mentioned that the report Sindh Drought Need Assessment (SDNA October 2018) conducted by FAO in collaboration with Natural Disaster Consortium (NDC) reveals that of all the surveyed household, 25% reported death of their cattle, 21% in buffaloes, 53% in goats, 45% in sheep, 20% in camels 18% in donkeys, and 57% in poultry during past six months.

Tharparkar district hosts more than 20% small ruminant of the whole province Sindh. The small ruminants are predisposed to multi-stress in the district which make them susceptible to lethal diseases like PPR.  The disease can be prevented and eradicated through vaccination.

Drought in district Tharparkar directly affects the growth of vegetation as well as water resource for livestock, which in turn results in loss of animal production, and livestock high mortality rates, which is a direct threat to food security and livelihoods.