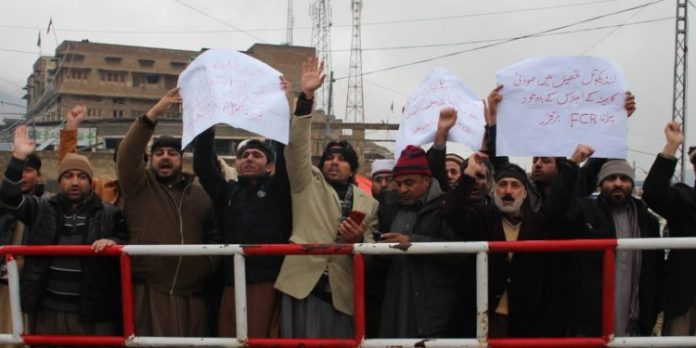 LANDIKOTAL: Local journalists on Thursday staged a protest demonstration on the occasion of first meeting of the Khyber Pakhtunkhwa cabinet in the tribal district over not inviting them for coverage.

The first ever meeting of the KP cabinet in the tribal districts was held in Landikotal, Khyber tribal district, however, the local journalists were not invited for coverage which annoyed them. The tribal journalists gathered at the tehsil compound and chanted slogans against the provincial government, cabinet, chief minister, information minister and district administration. They also chanted slogans against what they termed ban on media.

Mehmood Khan said it is first time that the cabinet his holding its meeting in the erstwhile Fata. He said the provincial government has made a plan to resolve all the problems of the area.

The chief minister said some elements were creating misunderstandings about the merger process. He appealed to the people to ignore negative propaganda and trust the government which is always here to resolve their problems. He said more meetings of the provincial cabinet have also been planned in the tribal districts from Bajaur to Waziristan.

Special security arrangements were made for the cabinet meeting. All the incoming and outgoing vehicles were checked and security on the Pak afghan border in Torkham was also increased.

Finance Minister Taimoor Saleem Jhagra said talks have been held with the federal government for opening of the Torkham border round the clock for trade activities. He said Sehat Insaf cards will also be provided to 500,000 families of the tribal districts to provide them healthcare facility.

The minister said the problem of shortage of staff at the Landikotal Hospital will be resolved soon.