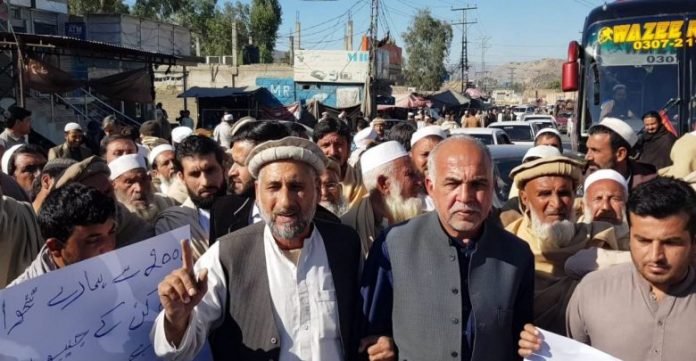 PESHAWAR: Sacked Khasadars personnel, local politicians and social activists have staged protest against the government for terminating the services of Khasadars men from different Tehsils of Mohmand district on Monda.

The protestors said that from tehsils  Khwazai, Baizai and Safi some 800 Khasadars men have been fired without any reason. The protests were also attended by Pakistan People Party workers and local leaders. They were holding banners and placards in their hands inscribed with slogans for their restoration.

Addressing the protesters, senior PPP leader Jehangrez Khan, social activist Mian Lal Raja Safi and others said that from 2008 to 2018, more than 800 Khasadars Baizai, Khawazai and Safi tribes have been sacked by the district administration which is a gross violation of tribal people rights.

He said that it was the Khasadars who sacrificed their lives in the fight against terrorism in the tribal districts in which hundreds of Khasadars were martyred and injured like other security forces but now the government has fired eight hundred of them without any reason.

He said that the dismissed Khasadars have filed an appeal for their rehabilitation at the Peshawar High Court (PHC), which is going to be heard by the honourable court but the above-mentioned authorities are working on the matter.

The protestors alleged that the actual salaries of the khasadars amounted to more than Rs. 25,000 per month, while in return for this and other duties, they are paid only Rs 15000. They added for this, they are not performing their regular duties but also performed other duties. They alleged that the high officials put the remaining salary in their pockets.

They said that under what law the deductions from the salaries of the Khasadar men are being made and it should be properly investigated and the responsible should be brought to justice. They are taking legal action against persons who cut their salaries. The protestors warned that if the fired Khasadars were not restored soon, they will extend their protest to entire tribal districts.