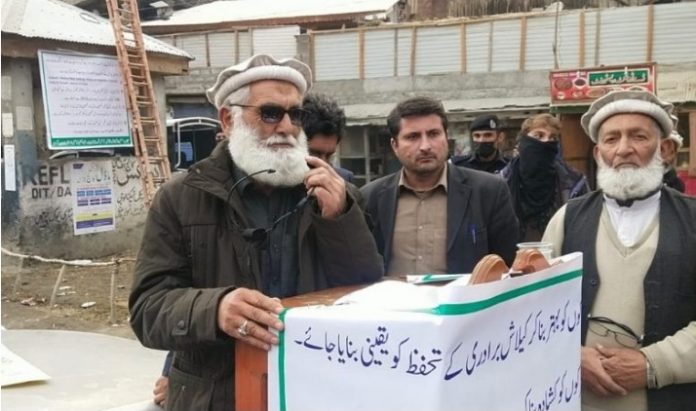 Locals elders have threatened to ban tourists from the Bumburet in case government failed to start work on the Kalash valleys road.

Bumburet valley is the largest of three Kalash valleys and situated about 20 kilometers south of Chitral town.

To press for their demand, Kalash and Muslim Defense Council, a local organization arranged a protest in Ayun village. Local elder Nusrat Azad chaired the meeting.
In their speeches, the local elders said that Prime Minister Imran Khan repeatedly claiming to promote tourism in the country. However, the notables wondered how tourism was possible without proper roads.

They said that thousands of foreigners every year visited Pakistani to observe Kalash community festivals. However, they regretted that the valley roads were so bad that a one time visitor cannot even think of visiting the area again.

The resolution stated that the Kalash valley road was very important from both the tourism as well as military point of view.

Demand for starting work on University of Chitral campus

Besides, the elders also demanded the government to start work on the University of Chitral campus in Syed Abad. They said that government has purchased 166 kanals of land for the purpose in Syed Abad.

They also regretted the delay in starting on proposed girls college in the area.
The resolution also demanded to restore the liquefied petroleum gas plant in Chitral to protect the area forests.

A large number of locals from three Kalash valleys took part in the protest.