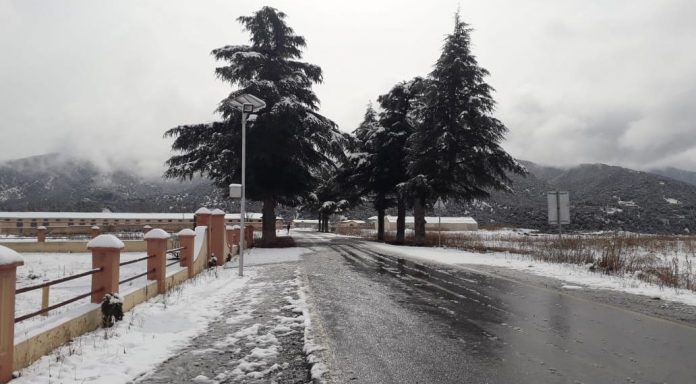 WANA: Snowfall happened in many areas of South Waziristan tribal districts for three consecutive days after a gap of about one and a half year which turned the weather pleasant.

The people of the area thoroughly enjoyed the snowfall and a large number of tourists also visited the area to enjoy the weather. The area people said the snowfall was continuing for the last three days which stopped on Saturday.

A large number of people came to the picturesque Makeen and Saam areas of South Waziristan after the snowfall and spenT good picnic time there.

Talking to TNN, a local person Waheedullah said the area people are very happy over the snowfall and the weather has turned pleasant. He said it was a lovely scene to watch the snowfall over the three days. However, he said, the snowfall also blocked several routes in the tribal district due to which people are facing difficulties. He said the people travelling from one area to other are especially facing problems and vehicles are stuck at several places.

“Snowfall and rain addressed the issue of shortage of water and now sufficient water is available for domestic use and for irrigation purposes as well. Our crops received enough water required at this stage and we are now hoping for good yields,” he said.

Shahid Mehmood, wo has returned to South Waziristan after 10 years of displacement due to law and order issues, said while talking to TNN that the area does not have facilities for tourists that is why few tourists come to the area. He said the area can become a tourist destination if the government provides facilities here. The areas of Makeen and Saam have beautiful views and in snowfall the beauty and attraction of these areas turns manifold, he excitingly said.

Shahid said the farmers will get relief as they will not be worried  to irrigate their lands as enough snowfall and rains have occurred in the district. He said a drought like situation was developing in the region before the current rains and snowfall, but now the situation has improved a lot.

Locals say a considerable number of visitors came to South and North Waziristan districts to enjoy the beautiful scenery after snowfall and performing Atten dance to express their joy over the pleasant weather.