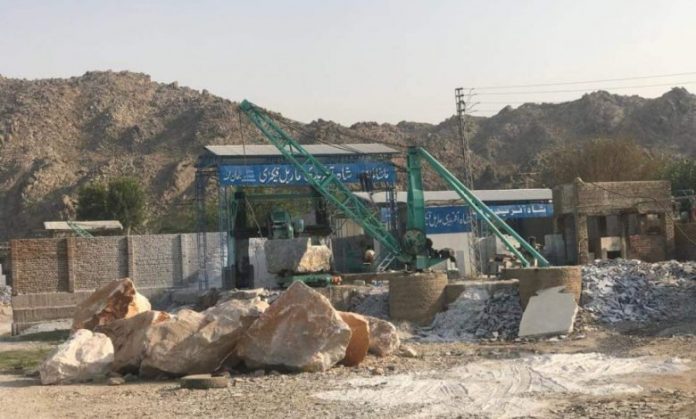 Jamrud: “Things were going well but with the passage of time, things started to change for the bad and our problems started to escalate. Now I’m thinking about quitting the business since we have invested a lot but the outcome seems to be good for nothing”.

Malik Maheed belongs to district Khyber Mullagori and is an industrialist by profession. After passing his matriculation exams in 2001 he started supporting his brother by working in the marble factory.

Speaking to TNN, Maheed Gul shared that when he took over the business with his brother, their financial condition was quite stable because the electricity bills used to be very low at the time and government taxes were less to none. Moreover, the marble rocks were available at a very cheap price and along with Khyber Pakhtunkhwa, we used to receive orders from Punjab, Sindh and different parts of the country as well.

According to him after gaining profit in the business he installed modern machinery in his marble factory but after some time with the boost in electricity bill, we faced the drainage problem in the factory. Whereas due to inflation in the country, the huge wages of truck drivers, high prices of rocks and a surge in the taxes affected the business very bad and he started getting worried about his business.

Another local marble industrialist named Rozi Gul has also gotten disappointed in his business. He says with the provision of only 8 hours of electricity he can’t finish his work but despite this, he submits one lac bill every month which is too much for him.

According to Rozi Gul, who also happens to be the owner of two marble factories, he has 10 workers working in his factory with a monthly income of 1.5 lac, that’s burning the stoves of 10 families. But if the same chain of events tends to happen constantly, he’d be compelled to close down his factory.

Rozi Gul shared that there are 278 marble factories in MullaGori, in which more than 2600 workers are assigned but due to the negligence of the government the marble industries in our area are getting severely affected.

He shared that MullaGori’s marbles are famous all over the country and the founder and father of the country, Quaid E Azam’s shrine is also designed with marble.

He further shared that the government is intending upon making marble cities in other parts of the country but due to the current condition in our area, the owners of the marble factories are getting bankrupted.

According to him, last day Khyber’s Deputy Commissioner and Director General Environment visited the marble factories and expressed their concern about the wastage coming out of the marble factories. They have given a deadline of 10 days to the factories owners saying that the drainage from the inside of the factories should not come out. This is a very difficult situation for the owners because they don’t have the resources to stop this situation.

Regarding this issue, Deputy Commissioner Khyber Mansoor Arshad told TNN that an open forum is being held this month to resolve the issues of these owners so that their problems can be heard and discussed with the high authorities for its solutions.

Referring to the issue of drainage, he said that the wastage from the marble factories was causing bad effects on people’s health and spreading environmental pollution as well. He said that the Chief Minister, Chief Secretary and Chief Justice are visiting the said area on the orders of Peshawar High Court.

They have issued clear orders to the local administrations to arrange the recycling process for the owners of the marble factories within 10 days and meet all the owners and persuade them on this matter. Besides, no further concession will be granted after the given time period.

He said that clean water from the toxic material is not suitable for drinking either. During his conversation with TNN, Director General Environment, Dr Amjad Ali Khan shared that he is not against the idea of business but the wastage coming out of these factories into the area is a legal crime.

He appealed to the owners of local factories to arrange a drainage system under the boundaries of the marble factories so that this problem could be solved permanently.