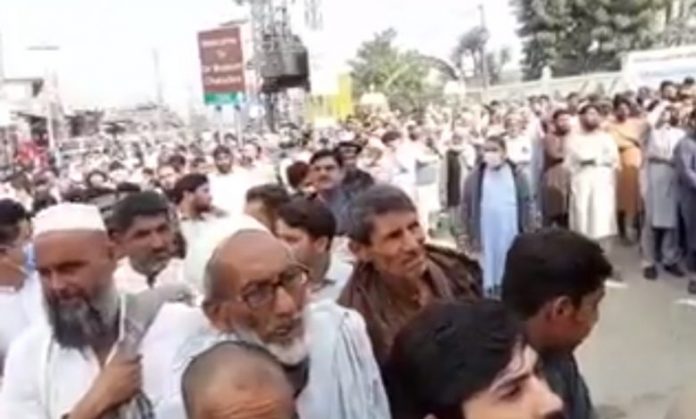 LOWER DIR: The body of two-year-old Hareem Shah, who went missing five days ago, was found in Chakdara, Lower Dir, on Wednesday, after which the area people staged a massive protest against the incident.

The minor girl went missing from Sharab Kohi, Rahmora Darra area on October 23 and the report of the incident was filed the same day. Police said the body of the little girl was found at a mountain in Ramora Darra. It said the little girl has been killed mercilessly. The body was sent at Khyber Medical University Peshawar for medical examination. Twelve suspects have also been arrested from the area, who are being interrogated.

The news about the murder of minor girl spread like a jungle fire. Hundreds of people attended the funeral prayer and then held a protest demonstration to condemn the incident and demand arrest of the culprits behind this heinous act.

The protest rally in Chakdara Bazaar was organised by the central trade union which was attended by the civil society activists and other people in large number. The protesters gave a deadline of three days to police for arrest of culprits and said in case of failure, they will march towards Islamabad.

Chakdara Bar Association President Attaullah Advocate, who also attended the protest, said no member from the bar will take the case of the accused, if arrested. He said the bar association will go to any extent to get justice for the victim family.

Deputy Superintendent of Police (DSP) Ijaz Khan said 12 people have been arrested on suspicion of involvement in the murder. He said police are thoroughly investigating the incident and culprits will be arrested soon.

Charsadda Police arrested the key suspect who is aged between 45 to 50 years and he is a resident of the same village. However, the main suspect pleaded not guilty when he was produced in the court.