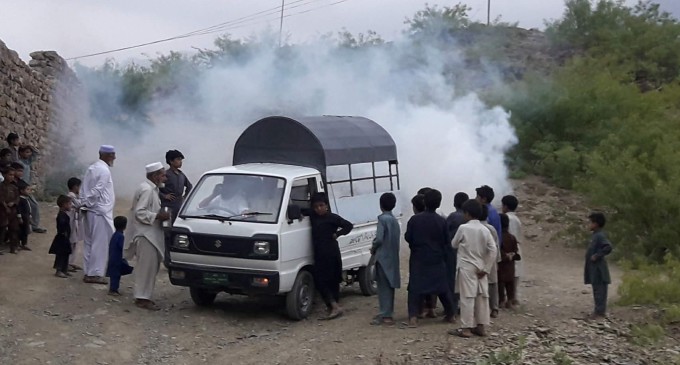 KHYBER: People in parts of the Khyber Pakhtunkhwa have started to demand provision of basic amenities and resolution of local issues in exchange for getting Covid-19 vaccines.

Recently, a local jirga in Akikhel area of Landi Kotal tehsil announced to boycott Covid-19 vaccination to press authorities to eliminate dengue virus from their locality, which health authorities managed to get reversed after starting fumigation in the area.

Earlier last Saturday a female had died of dengue fever in the village and tribesmen gathered to offer condolence to her family and expressed their concerns over the spread of the mosquito borne virus.

“There has been a dengue outbreak in the area which affected several people; however, government failed to contain the spread of the virus,” Mr Shah said.

Yar Muhammad, one of the jirga participants, said that they have decided to not to inoculate themselves against Covid-19 till the elimination of dengue mosquito. “Not only those getting Covid-19 vaccines would be fined but villagers would also stay away from their weddings and funerals,” Mr Muhammad said.

Akikhel village has a population of 252 people and 32 of them have thus far received Covid-19 jabs; however, the vaccination has stopped after jirga’s decision.

Though an anti-vaxxer tradition has existed in Khyber Pakhtunkhwa for past several years; however, recently locals in different parts of the province have started linking administering polio vaccine to their children to provision of civic amenities including uninterrupted power supply, employment opportunities, drinking water and infrastructure.

The trend has now morphed into linking Covid-19 vaccination with provision of basic necessities.

Asad Zia, a spokesperson for the health department told TNN that it was uncalled for general public to link vaccination with other demands. Mr Zia said that health department’s strategy regarding this issue was very clear and recently government hinted at travel sanctions, closure of mobile SIMs and suspension of salaries to government employees to force a person to get Covid-19 jabs which was now yielding positive results.

He said that there was lack of common sense among people and they pretend as if they were doing favor to government by getting vaccinated “Health department encountered similar demands during polio campaign and they have department’s team in place to persuade people to get vaccinated,” he said.

Inayat Afridi, a local also said that the locals have walked back on their decision to boycott vaccination and now they would receive their Covid-19 jabs as usual.