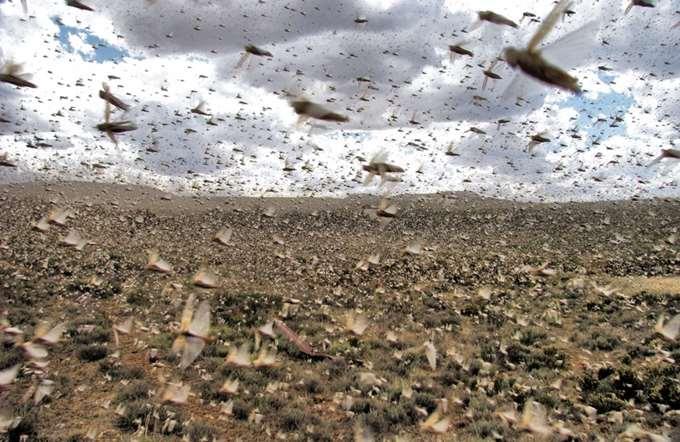 PESHAWAR: After being spotted in different areas of Punjab, locusts have now attacked Khyber Pakhtunkhwa through Dera Ismail Khan district.

Emergency has been declared in southern districts of KP after the locusts attack and experts have reached the district from Peshawar and Karachi to control the situation. According to experts the province needs Rs7.3 billion funds to overcome the locusts attack.

DI Khan Deputy Commissioner Muhammad Umair said locusts have entered Kari Shamozai and Drazenda areas of the district. The Secretary Relief Department has declared emergency situation in southern districts and fumigation on the fields is being carried out. Preparations are also being made to conduct aerial fumigation.

Experts said it is imperative to control the spread of locusts before February; otherwise, the situation may go out of control.

Southern districts of KP were already on high alert due to possible attack on crops, particularly the wheat crop. Southern districts have major share in wheat production of KP that is why the provincial government has declared emergency in the whole area to cope with the imminent threat. The emergency situation will apply to DI Khan, North and South Waziristan, Tank, Lakki Marwat, Karak, Bannu, Kohat and Hangu.

Under the directions of Chief Minister Mehmood Khan, all resources will be utilised to thwart the threat of locusts attack on crops. Orders have also been issued to form committees in southern districts to find solution to the problem. These committees will be led by deputy commissioners and members from Agriculture and Livestock departments will also be included.

An Emergency Response Cell has also been set up at the main office of the Agriculture Department, while small regency cells will also be set up on district level. All the departments in southern districts have been directed to cooperate with the Livestock and Agriculture departments to deal with locusts emergency.

The emergency situation in KP has surfaced after locusts attack on wheat, potato and other crops in some areas of Punjab. The farmers in these areas used some traditional methods like beating drums, tins and smoke and fumigation to get rid of the insect attack, but it did not prove much fruitful.

Agriculture experts say locusts stay at trees during night-time and attacks crops after sunrise. They said locusts are attacking the fields more frequently and in huge quantity in Pakistan now which is a matter of grave concern.