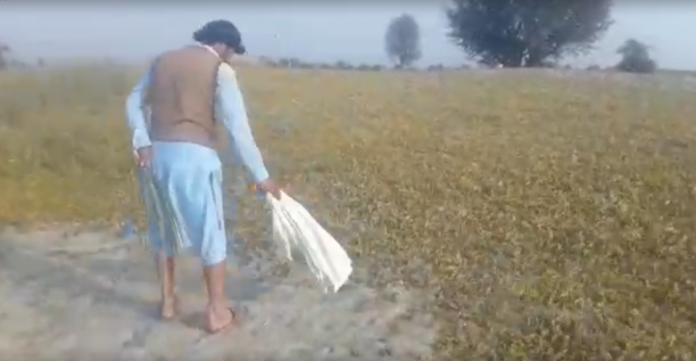 LAKKI MARWAT: After playing havoc with the standing crops in late February and early March, locusts have once again attacked crops in Lakki Marwat district of Khyber Pakhtunkhwa and causing massive damage.

This time locusts have attacked the fields with more intensity and mostly the locusts are small sized. Farmers are faring massive damage to their standing crops of wheat which is almost prepared for harvesting.

The district administration is taking steps to try to control locusts within limited resources. Deputy Commissioner Abdul Haseeb visited the affected areas and supervised the officials who sprayed the fields.

Locusts had entered Khyber Pakhtunkhwa through Dera Ismail Khan in February from where they entered Lakki Marwat and damaged crops.

The local people said locusts in millions entered Lakki Marwat and attacked standing crops. They said the remaining crops will also be damaged if timely measures were not taken to control locusts. They said locusts have entered the area in greater numbers than the previous attacks and they are spread over several kilometres area. They said the issue seems to be out of control of the Agriculture Department.

The local farmers are also employing different traditional techniques to get rid of locusts, but these techniques are not yielding desired results.

Agriculture experts say locusts first originated in Tharparkar area of Sindh, and then played havoc with fields in southern parts of Punjab and entered finally in KP through DI Khan.

The government had imposed emergency in various areas affected by locusts, but no visible steps were taken for controlling it. Experts believe that locusts attack may put its impact on total agricultural yields in the country and it may also result into food shortage.