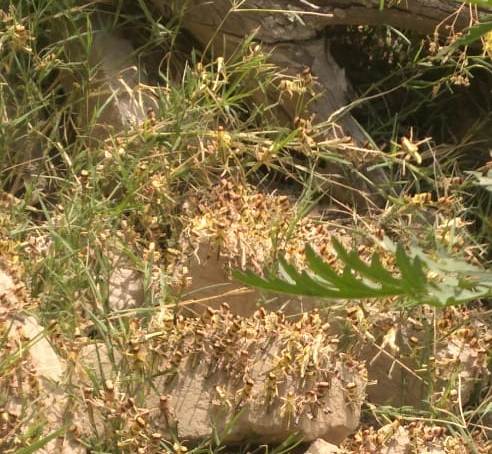 LAKKI MARWAT: Locusts are playing havoc with the standing crops in Lakki Marwat and now even a large number of locusts have attacked the district with more intensity as compared to the last attack.

Most of the locusts which have attacked the fields this time are smaller in size. Millions of locusts have entered Gulbaz, Dehqan, Tajazai and other areas of the district. The locusts are particularly damaging the vegetables, standing crops and orchards.

The local farmers are complaining that the district administration has not made any preparations to avert the locusts attack. They said locusts had laid eggs in different parts of Lakki Marwat three months ago and at that time the farmers had asked the deputy commissioner, district administration and Agriculture Department to take steps for saving the crops. They were demanded to arrange fumigation to protect the fields from Lakki Marwat, but nothing has been done so far.

During the last attack of locusts in Lakki Marwat, they had laid eggs which have produced more locusts even in larger number. These locusts are posing serious danger to standing crops and orchards. The local farmers have demanded the government to take emergency steps to save their crops.

Locusts had entered Khyber Pakhtunkhwa through Dera Ismail Khan in February from where they entered Lakki Marwat and damaged crops. The local farmers are also employing different traditional techniques to get rid of locusts, but these techniques are not yielding desired results.

Agriculture experts say locusts first originated in Tharparkar area of Sindh, and then played havoc with fields in southern parts of Punjab and entered finally in KP through DI Khan.

The government had imposed emergency in various areas affected by locusts, but no visible steps were taken for controlling it. Experts believe that locusts attack may put its impact on total agricultural yields in the country and it may also result into food shortage.

Locusts invasion has spread across Pakistan, which has causing massive damage to crops and orchards. It is posing a threat to food security in the country already struggling to tackle the coronavirus pandemic that has caused more than 1,400 deaths.

Minister for Information and Broadcasting Shibli Faraz has said locusts attack has happened in Pakistan after 27 years, but the government has made full preparations to tackle it.

He said that the National Locust Control Cell was being established to face this challenge. He said that presently locusts are present in five divisions of Punjab and some areas of Balochistan and Khyber Pakhtunkhwa.

Mr Faraz said that there was a threat of another locusts attack on Pakistan from Africa in early July. However, he added that preparations were made to tackle the situation as ample pesticides were available and six planes were available for fighting locusts.