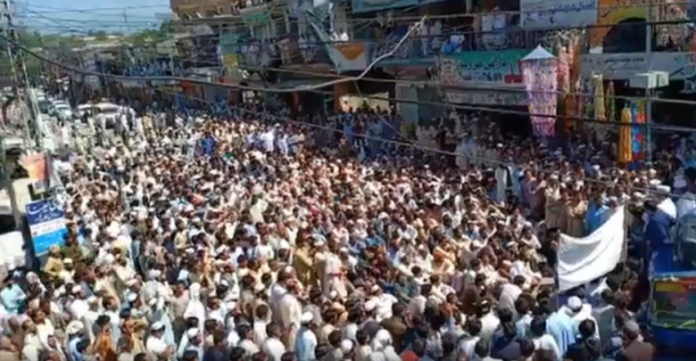 LOWER DIR: The people of Gosam area of Lower Dir on Wednesday blocked Dir-Bajaur-Peshawar Highway to record their protest against failure of police to arrest the main accused behind the murder of four persons during a Jirga six days ago.

The protesters alleged that the concerned station house officer has been transferred and he has been given political patronage. The Jamaat-e-Islami (JI) district Ameer Aizazul Mulk and Ziaul Haq of Rah-e-Haq Party addressed the protesters and demanded immediate arrest of the accused.

According to latest reports, the protesters kept the road blocked for over three hours due to which a worse traffic jam was witnessed and long queues of vehicles were seen. Transporters and passengers faced difficulties due to traffic blockage in hot weather. The protesters did not allow any kind of traffic to pass through the highway.

Last Friday, four persons lost their lives and three others sustained injuries in a firing incident during a Jirga in Gosam area of Lower Dir.

Police said the deceased belonged to the same family. A Jirga was going on to settle a dispute when the participants opened fire on each other due to which four people died and three others were injured. The deceased were identified as Rehmatullah Jan, Hameedullah, Riaz and Ismail.

The bodies and the injured were taken to hospital. Sources said the Jirga was being held to settle some monitory dispute.

Incidents of firing sometimes occur during Jirgas in Khyber Pakhtunkhwa and tribal districts when members of rival groups come across each other. In such an eventually, instead of conflict resolution, the conflict gets worse and more casualties occur.

Ten days ago, a similar incident happened in Battagram area of Charsadda.

An exchange of fire happened between rival parties after a verbal clash during a Jirga due to which five persons lost their lives, police said.