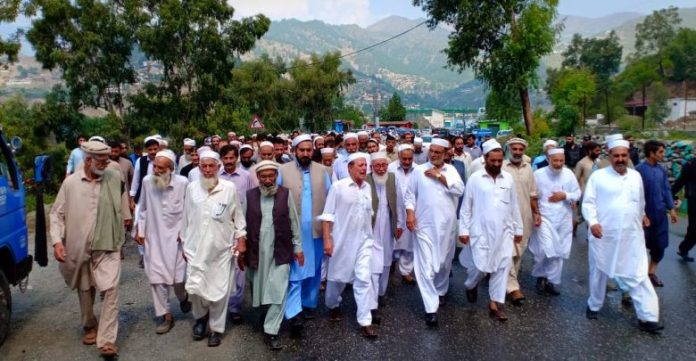 LOWER DIR: The people of tehsil Khal in Lower Dir on Friday held a protest demonstration against illegal cutting of forest wood and establishment of a forest check post in the area.

Activists of different political parties and area elders and social activists took part in the protest. People from Khal, Tormang Darra and Sultankhel gathered at Goplam Khal area and staged protest against establishment of forest check post in Goplam Khal and illegal cutting and smuggling of forest wood.

Addressing the protesters, Malik Muhammad Zeb, Malik Jehanzeb, Malik Naqeebullah, Shad Nawaz Khan, Malik Fazlur Rehman, Akhunzada Sikandar and other elders said they will not allow establishment of forest check post in Goplam Khal area. They alleged that the Forest Department hasn’t established this check post to stop timber smuggling, rather they have established it for their own benefit. They alleged that the check post will be used for negative purposes.

A proclaimed offender was killed in an encounter with police in Upper Dir on Friday.

Police said the accused, Shah Muhammad was wanted in over a dozen cases of murder and attempted murder. The accused opened fire on a police party in Nehag Darra and he was killed in retaliatory fire by police. Police claimed that five accomplices of the accused have also been arrested and they are under investigation.