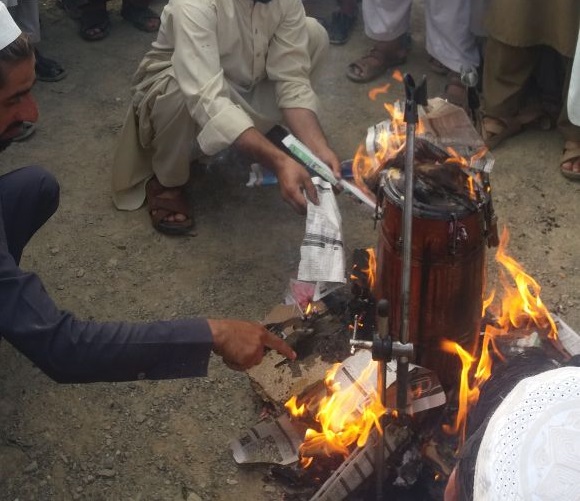 LANDIKOTAL, 9 September: The administration of a madrassa Landikotal, Khyber Agency on Friday set on fire music instruments seized during a raid on a musical function on the day of Eidul Azha.

Syed Muhammad Ibrahim, patron of Darul Uloom Siddiqia Khanqah Banoria said the Madrassa had banned drinking of liquor, betting and music functions in Ashkhel area. He said some people had arranged a music function in the area on Eid after which the Madrassa with the help of local people and Khassadar officials raided the venue of the programme and seized music instruments and also brought the programme organisers to the Madrassa. He said the music function organisers tendered apology after the Friday prayers and promised not to arrange such functions in the area in future.

Syed Muhammad Ibrahim said the Madrassa administration torched the music instruments on Friday for which they were helped by the administration. He said such function was organised in the area after 10 years. He said punishment for such an activity is torching two rooms of the house of the organisers.

“Whenever we get information about activities like liquor drinking, music functions or betting we raid the venue with the help of local elders. Punishment for such a crime is torching two rooms of the house of such people. We don’t impose any fine in such cases,” he said.

Meanwhile, administration of the seminary on Saturday apologized in written from political administration and public for burning musical instruments.

Management of the seminary gathered at the assistant political agent office in Landi Kotal after which the administration assured them that no action would be taken against them.

The management raided a function in Ashikhel area on Eidul Azha and burnt the musical instrument. The political administration had taken notice of the issue and ordered the management to appear before the APA.

The seminary management said that it happened due to misunderstanding and assured the management that they would not take law into their hands in future.