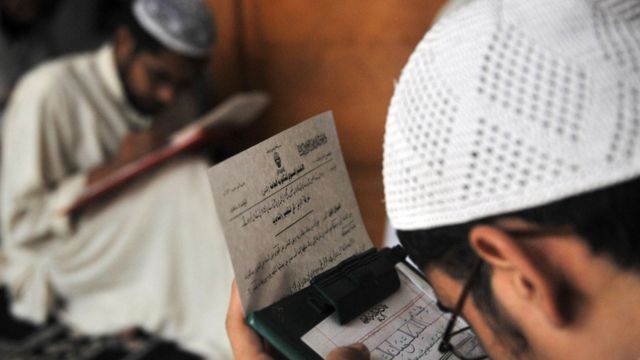 PESHAWAR: A student of Madrassa Jamia Manzoorul Islam Lahore North Cantt has filed a case against the seminary’s patron Mufti Azizur Rehman accusing him of subjecting him to sexual abuse for a long time.

The complainant, Sabir Shah, a resident of Swat, filed complaint in Lahore North Cantt Police Station that he got admission in the madrassa in 2013, and when he was in the fourth grade, Mufti Azizur Rehman accused him of making someone else attempt his exam paper in the Wafaqul Madaris exam, and banned him from exams for three years. Sabir Shah said he requested Mufti Azizur Rehman to lift the ban, and he agreed only on condition that he will have to allow him to sexually abuse him, to which he agreed under compulsion and endured sexual abuse for several years.

Mufti Azizur Rehman in a video message, which went viral on the social media, said on oath that he never committed any wrong.

He said he was drugged by Sabir few minutes earlier and then he made his video. He said he was not in his senses in the video as he was tricked. He said the video is two years old which is released now to defame him.

What’s in the video?

On Wednesday, a video went viral on the social media in which it could be seen apparently that an elderly person is doing some indecent acts with a youth. After that indecent act, the youth comes towards the mobile phone and stops the video recording.

According to information received though different sources, the Lahore Police are conducting raids to arrest Mufti Azizur Rehman. However, he was not arrested till filing of this report.

Jamiat Ulema-e-Islam-Fazl (JUI-F) has terminated the basic membership of Mufti Azizur Rehman from the party, and the madrassa administration has also expelled him from his job.