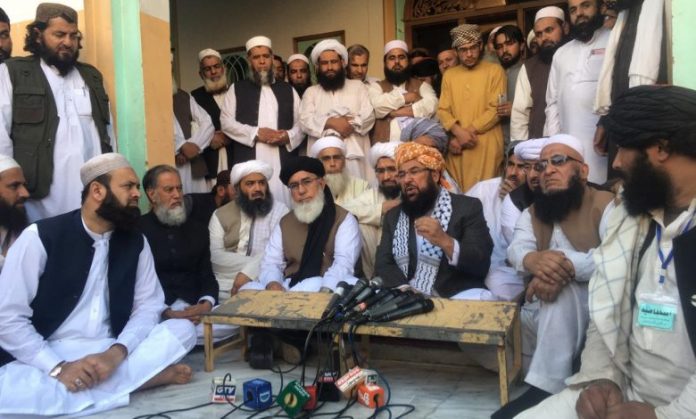 Talking to media persons after visiting the madrassa in Peshawar where a blast happened three days ago, Abdul Ghafoor Haideri said the government writ is invisible. He demanded formation of a high-level judicial commission to probe the incident.

The JUI-F leader said the public meetings of the PDM in Peshawar and Multan will go ahead according to schedule. He said the JUI-F chief Maulana Fazlur Rehman is saying from the beginning that this government is incompetent. He said the government has failed to control sky-rocketing inflation and government writ is invisible, while joblessness is on peak.

Abdul Ghafoor Haideri said the terror attack in Peshawar madrassa was an extremely tragic incident, but such attacks cannot stop the opposition’s rallies. He regretted that no high-level government official has visited the blast site. He said it is a matter of pity that the students of madrassas are treated differently from students of colleges and universities.

The JUI-F leader demanded Shuhada Package for those who lost their lives in the madrassa blast. He said the madrassa administration must also be given licences for keeping arms for their security. The JUI-F leader and other people also offered Fateha for the departed souls.

Peshawar Police has arrested 55 suspected persons during crackdown after blast in Dir Colony madrassa in which eight persons lost their lives and over a hundred others were injured. The Counter Terrorism Department (CTD) has filed the first information report (FIR) of the attack against unknown miscreants. Further investigation into the case is underway.

The Jamaat-e-Islami (JI) chief Sirajul Haq along with a party delegation also visited the madrassa and met with patron Sheikh Rahimuddin Haqqani.

The JI chief said October 27 was a dark day in the history of Pakistan as a place of religious education was attacked in an Islamic country. He demanded the government to ensure immediate arrest of the culprits and provide security to religious seminaries.