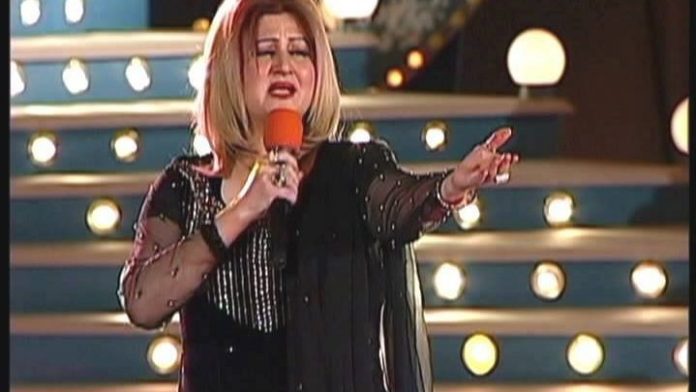 PESHAWAR: Legendary singer Suriya Khanum, popularly known as Mahjabeen Qazalbash, who ruled the Pashto music industry for four decades, left this mortal world but left unerasible imprints on the industry through her melodious and attractive voice and unique style.

On the New Year day, Mahjabeen Qazalbash suffered a heart-attack and she spent the rest of her life’s days on a hospital bed in Peshawar. She breathed her last on February 26 at the Lady Reading Hospital and was laid to rest the next day at Gul Kasht Colony, Civil Quarters, Peshawar.

The family of Mahjabeen Qazalbash originally belonged to Iran which first shifted to Kandahar province of Afghanistan and then to Peshawar. The family had a connection with Persian music. Qazalbash tribe’s people are known to be very polite and enlightened and they have special love for art and literature.

Suriya Khanum’s father’s name was Imdad Ali Qazalbash. She had three brothers and a sister, while another brother died at young age.

From Suriya Khanum to Mahjabeen Qazalbash

Mahjabeen Qazalbash had said in an interview that she joined the field of Pashto music when she was 13 years old. She got education up to middle level from Forward Public School in Peshawar. She said when she requested her uncle Noor Ali for an audition at Radio Pakistan, her father opposed the idea due to her very young age. She said she was told by her English teacher that she had a wonderful voice as she used to take part in Na’at and debate competitions. The teacher advised her to give an audition at Radio Pakistan and sing national songs. Her uncle eventually took her to Radio Pakistan for audition and then a wonderful journey of achievements in music started.

Mahjabeen Qazalbash said in the interview that when she was studying in 8th class, she saw an advertisement in newspaper that a new face is being searched for the role of ‘Mamonay’ for Pashto film ‘Mamonay Sher Bano’. She said she went for audition of the movie and the producers told her that although she is very young for the role, but she will be selected as the character is an innocent girl and the face of Mahjabeen Qazalbash suits the role. At that time Mahjabeen was told to wear double dress to play the role to look a bit older than her actual age. She said her mother initially opposed her entry to movies, but agreed later on.

She said the film director Kamran as so impressed with her acting and innocence on her face that he suggested the name of Mahjabeen for her which means a face like moon.

The first son of Mahjabeen Qazalbash ‘Speeni Spogmai Waya Ashna Ba Charta Vi Na‘ was a super-hit song and so far several singers have sung this song in different styles. Mahjabeen’s mother tongue was Persian, but she was well versed in other languages and recorded songs in eight language including Pashto, Seraiki, Hindko, Punjabi, Sindhi and Balochi. However, she attained great fame in Pashto songs.

Mahjabeen said in the interview that during the shooting of ‘Mamonay Sher Bano’ movie in Swat, she along with her parents and brother was sleeping at rest house when suddenly fire broke out in the room. She said Aimal Khan, who was in a nearby room, suddenly came and rescued her mother and other family members. She said she married Aimal Khan after that incident.

Mahjabeen got the title of Bulbul-e-Sarhad during the reign of Ziaul Haq for her melodious voice. AVT Khyber, a private TV channel, also gave the title of Bulbul-e-Khyber to the Mahjabeen. The government of Pakistan had conferred Tamgha-e-Imtiaz to her over her services. She also got various national and international awards from time to time in recognition of her services for Pashto music industry.

Mahjabeen has left behind two sons, Shahid Orakzai and Aamir Orakzai and a daughter Huma Orakzai. However, none of them is associated with music industry. Condolences poured in from government officials, eminent artists and music lovers after the death of Mahjabeen Qazalbash. The fans and followers of Mahjabeen Qazalbash believe that her death has created a huge void in Pashto music industry. However, no prominent government representative or politician was seen at the funeral although media persons were there.

Besides winning numerous awards, Mahjabeen won millions of fans through her attractive and melodious voice and this asset is here to stay for ever.