BISHAM, 2 August: The people of Swat, Shangla and Dir on Monday took out rallies and distributed sweets to celebrate lifting of Custom Act from Malakand Division.

The elected lawmakers, local government representatives, traders and other people participated in the separate rallies which were organised in Timergara Bazaar, Bisham and Mingora. Member Khyber Pakhtunkhwa Assembly Muhammad Rashad was leading the rally in Bisham. Participants of the rally expressed jubilation over the lifting of Custom Act and distributed sweets.

Rashad Khan said he had submitted an adjournment motion in the KP Assembly against Custom Act in Malakand Division. 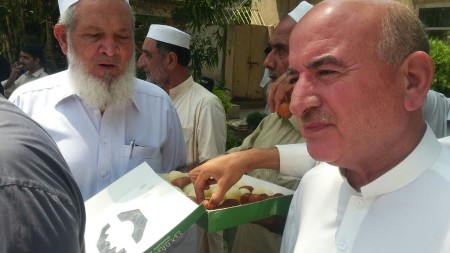 The All Parties Conference Action Committee also celebrated lifting of Custom Act in Mingora bazaar and announced to end their protests.

The action committee’s spokesman Fazlur Rehman Nono said at Swat Press Club that lifting of Custom Act is a victory for the population of Malakand Division. He said the unity of all the political parties and trade unions compelled the government to lift Custom Act.