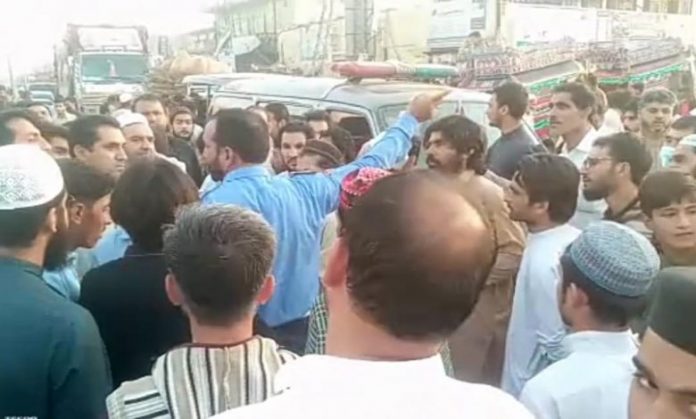 MALAKAND: Locals protesting against the killing of teacher staged a sit-in at Dargai Chowk and blocked Malakand road for four hours on Thursday.

The teacher identified as Abdul Aziz was on his way home after purchasing groceries, when he was ambushed near National Bank Chowk by some attackers. The injured teacher was rushed to tehsil headquarters hospital Dargai, where he died of wounds. Malakand Levies personnel, who were present in the bazaar at the time of attack, pursued the attacker and opened fire; however, the assailants managed to escape from the scene.

Later the heirs and locals took the body to Dargai Chowk and closed the Malakand highway for all kind of traffic. The protesters chanted slogans against the district administration and demanded arrests of the killers.

The protesters were of the view that sometimes back a youth from the slain teacher’s family was murdered and his body was dumped in wilderness; however, authorities failed to resolve the murders’ mystery. They said now another member of the same family has been shot dead in broad daylight.

The slain teacher Abdul Aziz also ran private school and was recently hired as primary school teachers in the elementary and secondary education department. He was working at the Government Primary School Qaldara.

A large number of teachers from both the public and private sectors turned up at the protest and kept the road closed for traffic for about four hours.Awami National Party Malakand general secretary Haji Arshad Mohamand and Pakistan Tehrik Insaf’s leader Haris Khan later turned at the protest to express sympathy with the bereaved family.

The protesters later peacefully dispersed to bury the dead after district administration assured them of arrests of the murders by Friday evening.