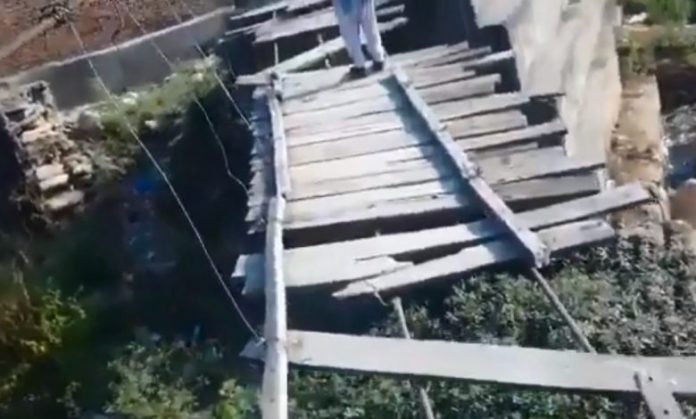 PESHAWAR: A video of a dilapidated bridge on a river in Makan Bagh area of Swat, the native town of youngest Nobel laureate Malala Yousafzai, has gone viral on the social media where it can be seen that schoolchildren are exposed to a life threatening situation for reaching their school.

The video has drawn criticism for Malala, the UN envoy for education, who according to various social media subscribers, has done nothing to promote education in Swat. Many people are also criticising the government for its tall claims of focusing on education, while the fact is that children risk their lives in Swat for reaching their school.

TNN has shared the video on its Twitter page which was retweeted by Reham Khan, also hailing from Swat, and she criticised Communication Minister Murad Saeed, who also hails from Swat, over the situation.

In the video, it can be clearly seen that the wooden bridge is broken at various points.

Peshawar-based journalist Rifatullah Orakzai said while addressing Malala Yousafzai and her father Ziauddin Yousafzai to do something about this bridge and the little kids crossing it dangerously.

Ziauddin, while replying to Rifatullah’s tweet said that according to his information, there is no such bridge in Makan Bagh, Mingora. On correction by Rifat, Ziaullah agreed that the bridge is actually situated in Amankot on Marghzar River.

Where this exact location in Mingora is? Just want to forward it to concerned people, Ziauddin bhai see this video @ZiauddinY @Malala https://t.co/MMTZXvNn8l

Another netizen, Chand Bibi, said, Malala only concentrated on getting out of Swat, while her other friends are still in the same school.

Another subscriber, Zaki, demanded the Khyber Pakhtunkhwa government to construct the bridge immediately.

Maqsood Butt criticised the local administration for its failure to repair the bridge.

“An apathy of local admin for not repairing the bridge( costing max Rs50k) unfortunately may cost young students their lives. But who cares !!!” he wrote on Twitter.

Another subscriber, Khalil, hailed the courageous children who cross the dangerous bridge daily to go to school.