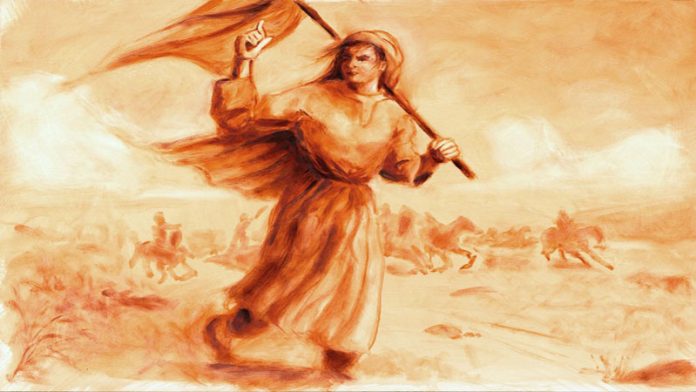 Pashtun history is full of tales of bravery and courage in the line of defence of land and nation. These tales are not only of the men, but women have also played equally important role in shaping this glorious history.

Malalai Maiwandi is one such illustrious example of gallantry and courage in the history of Pashtuns. This piece of writing covers Malalai’s biography, her role in the battlefield and martyrdom and historical background of second Anglo-Afghan war.

Malalai was born at 1861 to a shepherd father Agha Mohammad. Her father was Khogianri tribesmen and living at Kashak village, about three miles from Maiwand area of Qandahar.
Malalai was 19 during second Anglo Afghan and one of its decisive battles was fought on the night of her marriage on July 27, 1880.

This was the height of the Great Game, the shadowy struggle between Tsarist Russia and British Empire over routes of access leading to India, which changed raj’s policies regarding Pashtun lands.nTo protect, their Indian kingdom from Russia which was advancing across Central Asia, devouring Central Asian Khanates, raj needed to control Pashtun’s belt.

The rivalry between Shah Shuja and King Dost Muhammad Khan provided British with a chance to start interfering in Afghanistan affairs. Shuja, the deposed king was on exile in Ludhiana city in present day Indian Punajb and in order to retake his kingdom entered into agreement with Sikh ruler of Punjab Ranjeet Singh. In exchange for allowing his troops to march through Ranjeet’s kingdom to reach Afghanistan, Shuja agreed to cede Peshawar to Sikh empire.

The first Afghan War, where the British helped putting Shah Shuja in throne ended in a disaster and British force holding Kabul was routed. British envoy Sir William Macnaghten and his deputy Alexander Burnes were murdered by the Afghans. The Army of Indus was totally annihilated during its retreat and nearly 17,000 of its personnel perished and only a William Brydon, an assistant surgeon with the British East Indian Company’s army managed to reach Jalalabad.

Dost Muhammad was back in throne again while Shah Shuja again escaped to India. Sikhs managed to capture Peshawar from Afghans, which the British take over from them in 1849.

In 1878, Russia dispatched an uninvited diplomat to the court of King Sher Ali Khan, who in vain tried to keep the envoy out of Kabul. This was followed by British, who also dispatched an envoy to Kabul, when the Afghans stopped him from entering Afghanistan, raj invaded Afghanistan for the second time.

Amir Sher Ali tried to seek Tsarist help to keep British out of his country but in vain and died soon at Mazar Sharif. He was followed by his son Muhammad Yaqoob Khan and signed the Treaty of Gandamak.

The British army left Afghanistan after conquering the country; however, in September 1879, Afghan murdered raj’s representative in Kabul Sir Louis Cavagnari and his staff, provoking yet another British invasion of the country. British forces soon captured the country and installed Abdur Rehman Khan as king of Afghanistan.

This brings us to the Battle of Maiwand which took place in July 1880.

However, Ayub Khan, the younger son of Amir Sher Ali Khan and governor of Herat rose into rebellion. On July 26, 1880, a British force stopped Afghan forces at the Maiwand Pass and war started.

In the battle of Maiwand, there were several women including Malala were helping their countrymen in the course of fighting. During the fighting when the Afghan flag bearer was killed, Malala came forward, holding the flag while some accounts say she made a flag of her scarf and sang the famous Tappa:

“O my Love! I want you as a martyr in the battle of Maiwand. Otherwise in my whole life, I will consider you, no man of honour.
If you are martyr in Maiwand. I will wear my red scarf at your body”.

These verses and her courage also motivated the Afghan forces and they regrouped and attacked British forces, routing them. Only a few managed to escape from battlefield. British commanders reportedly said that they lost the war due to Malala; however, she was herself among the martyrs including her fiancé and father. She was reportedly had to marry the very night but instead martyred.

Malala is even today remembered as a symbol of courage and bravery.

In a nutshell, history is not just about heroics of men but women also have played their crucial role. Malala is one of those women and is equated with Joan of Arc and Molly Pitcher for her role in the war against invaders. She offered the highest sacrifice for the sake of her country and died at the night of her wedding and instead of draping wedding dress buried in her blood drenched dress.