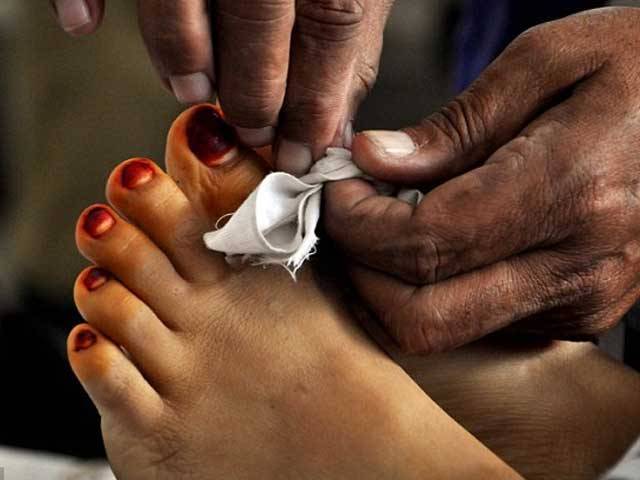 NOWSHERA: A woman in Pabbi tehsil of Nowshera district died of burn injuries after her husband set her alight on Tuesday, the police said.

The police said that the deceased was hailing from GarhiKhan area of Par Hoti area of Mardan.

Quoting her father, the police said that the husband was jobless and would not work to feed his family due to which squabbles become a routine matter between the couple.

On Tuesday, the husband came home and exchanged harsh words with his wife after which he sprinkled petrol on her and set her on fire.

They said tha she died on the spot and was laid to rest at her ancestral graveyard in Mardan.

Her father while talking to media said that he is a poor manwho cannot even afford to pay fee of a lawyer.

He appealed to Chief Justice of Pakistan to take notice of hisdaughter’s murder and award exemplary punishment to the killer.

Earlier on October 23, 2018,  a man named as Faiz Muhammad allegedly set her wife Ms Anam Bibi on fire in Garagaro area in district Tank over a domestic dispute. The woman later died in a hospital since she was seriously wounded.

A month later, the Khyber Pakhtunkhwa Commission on Status of Women took notice of the incident and directed police and other relevant departments to investigate the case properly and provide justice to the victim’s family.

Some local people termed it an honor-related murder and said that the woman was killed for allegedly having illicit relations.

It merits recalling here that Ms Anam Bibi had eloped with Faiz Muhammad about a year and a half ago and married him without the consent of her family. The couple also had a two-month old daughter.

The father stated in his report that Faiz initially claimed that his wife committed suicide but when he met his daughter in the hospital, she informed him about the actual situation.

Hospital officials had said the victim’s family had told them that she had suffered burns while cooking in the house.

Police, on the complaint of the father, arrested the accused. According to police, during the investigation, the accused confessed to his crime and admitted to burning his wife.

Yet in another incident, unidentified people burned alive a woman inside her home in Athar Shesha area of Mansehra in January 2017.

A woman Aneela Bibi mother of three children in Mansehra’s Athar Shesha area was found burned to death inside her home. Police shifted the dead body to King Abdullah Hospital and lodged FIR against unknow persons.