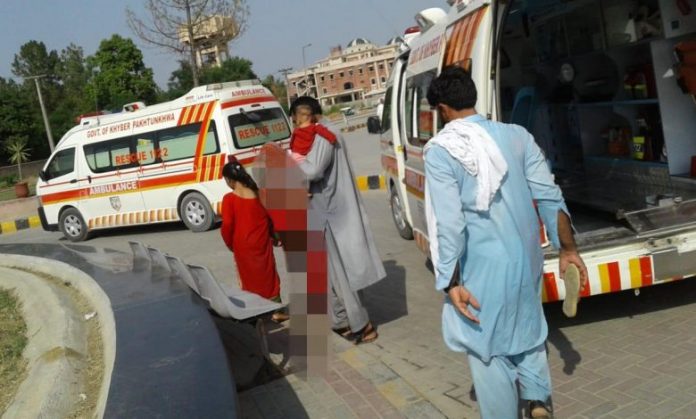 NOWSHERA: A man was killed in the name of honour in Nowshera district of Khyber Pakhtunkhwa on Tuesday, police said.

According to police, 24-year-old Sohail Khattak was shot dead in Jalozai Bazaar. The deceased’s father said in the report with police that his son Sohail Khattak, who was father of a child, had illicit relations with another married woman from Bakhti village of Cherat. He said the husband of the woman came to know about the illicit relations and deceived Sohail by sending him a text message from his wife’s mobile phone asking him to come to Jalozai Bazaar. He then allegedly shot dead Sohail in the bazaar.

Sohail died in the firing on the spot, while another person sustained injuries. The body and the injured were shifted by Rescue 1122 to Mian Rashid Shaheed Memorial Hospital, Pabbi.

Police said the body of Sohail was handed over to heirs after post mortem. The injured person, Sohail, was shifted to Lady Reading Hospital (LRH) Peshawar due to his critical condition.

Local sources said the wife of Sohail after a quarrel with him had gone to her parents’ home. Despite several Jirgas, Sohail was unable to bring back his estranged wife. Police have initiated investigation into the incident.

From 2010 till 2019, as many as 475 women and 361 men have been killed in the name of honour in KP. Honour killing incidents are very common in Pakistan and in most cases, the relatives are involved in such murders. The culprits usually dump bodies in a deserted place to hide their crime.

On July 22, a boy and a girl were killed for honour in Kaghan valley of Mansehra district.

The bodies of a young boy and girl were found in Patian Jareed area in the limits of Kaghan Police Station. Sources said both were killed in the name of honour.

On July 02, a young boy and girl were allegedly killed in the name of honour in Peshawar and buried in the darkness of night without funeral.

According to the FIR, the boy and girl were allegedly killed for honour by their relatives and buried in Rehman Baba graveyard. The FIR said the girl was killed by her father, while the boy was killed by his uncle in their own house after ‘consultation’ with other relatives.