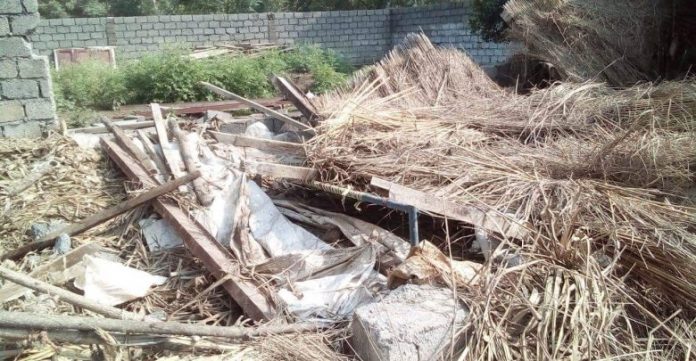 CHARSADDA: One person lost his life and a woman was critically injured when their house collapsed due to earthquake in Charsadda district of Khyber Pakhtunkhwa on Wednesday.

Police said the incident happened early in the morning in Baba Jee Killi where the house of Naeemullah collapsed due to earthquake. Local sources said the house was very old and in dilapidated condition due to which it could not sustain earthquake jolts and collapsed.

Sources said Naeemullah lost his life in the incident, while his wife was injured. The bodies and the injured women were retrieved from the rubble of the house by the local people. The woman was taken to hospital for treatment.

An earthquake of magnitude 5.9 on the Richter Scale jolted different parts of the country on Thursday morning. The tremors were felt in Peshawar, Hazara, Malakand, Kohat, Lahore, Sargodha, Dera Ghazi Khan and tribal districts.

The epicenter of the quake was located in the Hindu Kush range in Afghanistan at the depth of 226 kilometres. People came out of their homes in panic after feeling the tremors.

A man and a woman have been killed in the name of honour in Kolai-Palas, police said on Wednesday.

According to media reports, the accused, killed his wife and her alleged paramour after accusing them of having illicit relations. Police said the accused allegedly caught his wife with her paramour in the fields and opened fire on them, killing both of them on the spot. The accused fled the spot after committing the double murder.

Police has filed a case of the incident and initiated investigation.

Two days earlier, two people, including a woman, were killed in the name of honour in Martung tehsil of Shangla district.

Police has arrested two brothers accused of the double murder. Police said the accused brothers killed their sister-in-law and a person after accusing them of having illicit relations. Police also recovered the weapon allegedly used in the double murder from the accused.

Police said it received information that a man and a woman have been killed in Mandoria area. It said the policemen reached at the site of the murder and shifted the bodies to Martung Healthcare Centre.