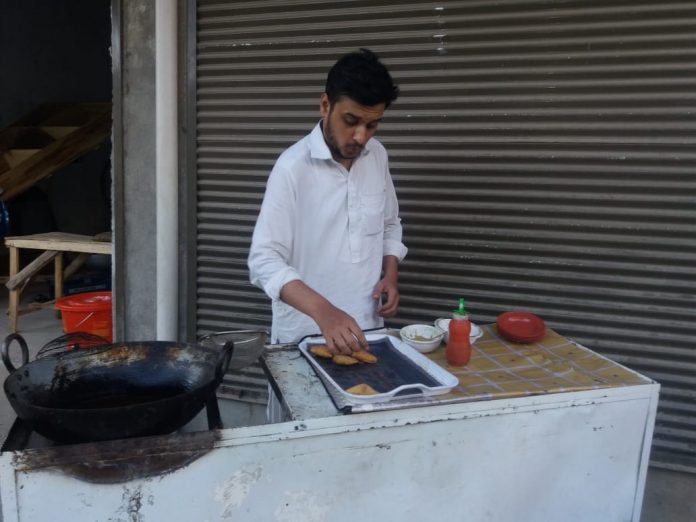 PESHAWAR: After losing his job due to coronavirus pandemic, a graduate hailing from Kohat Road area of Peshawar is selling samosas and fried potato chips to make ends meet.

Muhammad Salman, who is the only son of his parents, has immediately started helping his father after graduation. Muhammad Salman told TNN that few years ago he used to work in Cantonment Board on temporary basis. He was he used to receive salary of a peon, but actually he was contributing as a computer operator. He said his temporary job with the Cantonment Board ended two years ago.

Salman said he then started work at a pharmaceutical company as medical representative. The 29-year-old said his second job was good and he earned enough money to support his small family. He said his small family including his daughter, wife and parents doesn’t need massive resources and they spend simple life and keep their needs and aspirations limited according to their resources.

Salman said coronavirus has impacted every sector and the business of pharmaceutical
companies also faced huge loses. He said his company immediately suspended his salary after outbreak of coronavirus and he was told that the salary will be restored after improvement in the situation. He said he was then asked to leave the company as it had to do some downsizing to cope with the financial pressure within limited income.

“Whatever the situation may be, one has to earn to keep life going and make ends meet. That is why I am selling samosas and chips nowadays,” he said, adding that he now earns enough to support his family and keep some money in pocket.

Despite testing times, Salman said he has not lost courage and he has full faith that Almighty Allah will revive all the hustle and bustle and all businesses will flourish
once again.

He said his is satisfied that at least he is doing something to keep the life moving. Last month, the Economic Survey report said lockdowns and restrictions required to stem the spread of coronavirus are expected to cause a loss of 1.4 million to 18.53 million jobs in Pakistan.