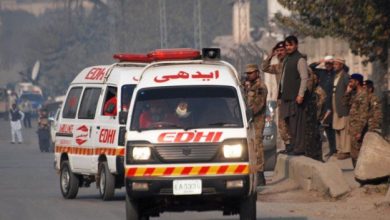 PESHAWAR: A man killed his father, uncle, three brothers and later committed suicide by opening fire in his head over a minor dispute in Tehkal within the jurisdiction of Guly Baba Police station on Monday.

According to the Police, the 24 years old, Abdullah was mentally challenged. Thus, he resorted to the killing spree over a minor dispute with his family. However, police said that evidences have been collected from the crime scene and further investigation is underway.

The victims have been identified as his father Jan Muhammad, who was 52 years old and his 50 years old Uncle, Faqir Muhammad.  He also gunned down his 16 old brother Jawad, 08 years old minor brother Luqman and 12 years old Saif Ullah.

The police officials said that the killer has used a 9 mm pistol. The dead bodies were shifted to The Khyber Teaching Hospital (KTH) for post-mortem. A statement released by the KTH media cell says the hospital has received six dead bodies.

After the tragedy, the locals and police rushed to the crime venue but when they reached, the police was informed that the assailant had committed suicide after committing the crime by shooting himself in the head.

The Superintendent of Police, Peshawar cantonment area Waseem Riaz told the media that as per the initial investigation, it was found that the assailant was mentally ill.  Riaz added that all the dead bodies have been handed over to the relatives of the family after the post-mortem examination.