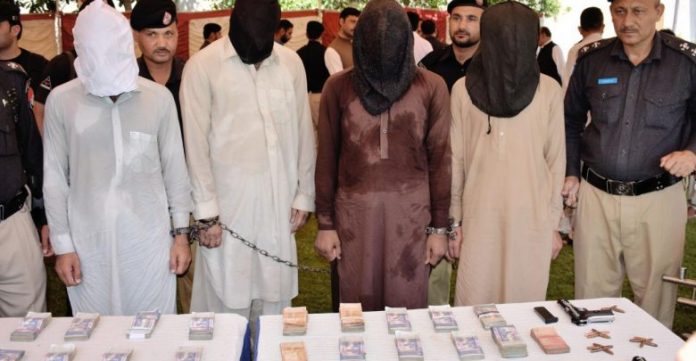 MARDAN: The Mardan police have arrested four bank robbers and recovered weapons from their possession.

The Mardan Police on Wednesday presented the four accused before the media with Rs 4.4 million which police have recovered from their possession. On this occasion, District Police Officer Sajjad Khan told media that two motorcycles and weapons used in the crimes were also recovered.

The DPO informed that the group head is from Peshawar district, adding that after initial investigation; they have to come to know that the members of the gang first met in the jail from where they organized their gang to rob banks.

“The head of the gang is wanted to the police in 12 banks robberies,” said the DPO.

The police officer added they would target individual who would withdraw a heavy amount from the bank. They would follow him via motorcycles to snatch the amount. The DPO informed that during one such attempt, they have injured a trader. The DPO said that case has been registered and further investigation is underway.

PESHAWAR: The Health department and Khyber Medical University on Wednesday signed a memorandum of understanding (MoU) to setup Nursing and Para-Medical College in the newly merged district Bajur.

The college will issue BSC degrees in nursing and paramedical disciplines. According to details, 30 seat quota has been reserved for students of Bajur district, 20 per cent quota for other tribal merged districts and 50 per cent for open merit.

Health Minister said that education activities would be started by this year, adding the government was focused on the development of merged district and reiterated his resolve that more health and development projects would be started soon to bring these areas as par with other developed areas of the country.