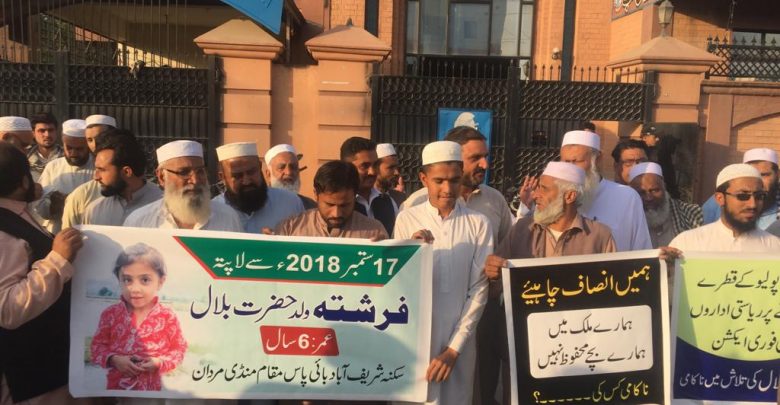 MARDAN: Mardan police failed to recovered a six-year old girl who went missing 37 days ago from Sharifabad locality of Mardan.

Following police’s inability, Residents of the area on Tuesday staged a protest against the police and demanded of the government to recover her.

The protesters who gathered outside Mardan Press Club were holding banners and placards inscribed with slogans against police.

Hazrat Bilal, father of the missing girl Farishta, said that his daughter went missing mysteriously on September 17 last month. “She went to a mosque for learning Quran and never returned since then,” he said, adding that they searched her everywhere and lodged an FIR after disappointment.

He complained that they came to know that police didn’t registered an FIR rather a simple complaint and never bothered to search her.

“We have no enmity or differences with anyone,” he said. Tehsil councilor Taj Wali said that police has interrogated many people but so far unsuccessful to locate Farishta.

They threatened if she was not recovered safe and sound till coming Friday, then they would launch protest drive that will continue till she is recovered.