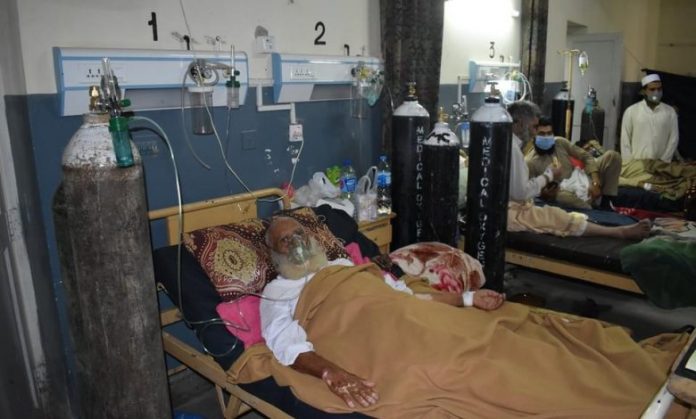 MARDAN: Like the first wave of coronavirus in Pakistan, the third wave has also affected Mardan district of Khyber Pakhtunkhwa the most and it is among the top-five affected districts in the country.

According to official data, coronavirus positivity rate touched 41 percent in Mardan on Saturday. At present, 85 percent ventilators are in use in Mardan Medical Complex (MMC), the largest public sector hospital in the district.

Pakistan’s first death from coronavirus last year was also reported from Mardan when Saadat Khan, who came back after performing Umrah, succumbed to the infection. The first lockdown in Pakistan was also imposed in Saadat Khan’s village of Manga and several dozen people were affected when the results of tests came back.

The panic and fear of the first wave in Mardan has returned now with such a high positivity rate. The MMC spokesman said 50 patients died in the hospital last week, while several other people are also dying of the disease in homes and no data is available about them. Several critical patients had to be kept in general wards due to lack of bed availability in the intensive care unit (ICU) in the MMC.

The district administration says 264 people have died of corona in Mardan and positive cases have reached 5,995; recoveries are at 3,278, and active cases are 2,453.

MMC corona ward assistant focal person Dr Jamal told TNN that the third wave of corona is proving to be more dangerous than expectations. He said most of the corona patients coming to MMC have lungs infection and majority of them are elderly people. He said 181 corona patients are admitted to MMC and 16 of them are critical. He lamented that people are not acting upon standard operating procedures (SOPs) to stem the spread of the virus. He said the number of corona patients in Mardan during the third wave is higher than the first two waves.

The National Command and Operation Centre (NCOC) has indicated to impose complete lockdown in cities with high corona ratio and Mardan is included in that. The district administration has also issued notification of smart lockdown in 16 union councils.

The government is repeatedly appealing to the masses to observe precautionary measures, and otherwise it will be left with no option, but to impose complete lockdown.