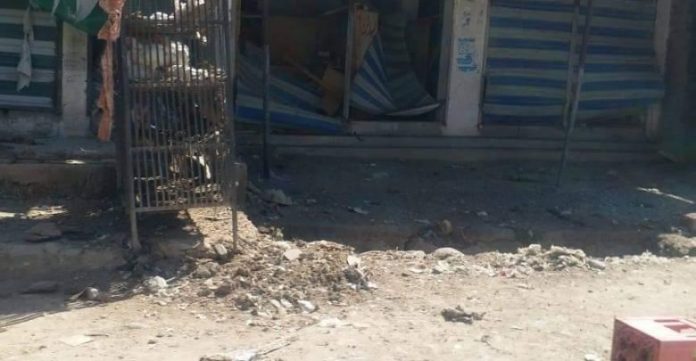 KHAR: One person lost his life in a bomb blast in Mamond tehsil of Bajaur tribal district, local sources said on Thursday.

Police said a bomb planted near the shop of a citizen, Muhammad Tahir, went off on Wednesday night due to which the 60-year-old watchman, Kawal Khan lost his life. The thud of the blast was heard in many surrounding areas. The blast caused damage to many shops and created an atmosphere of fear in the area.

Police have filed a case against unknown miscreants and initiated investigation. It was not clear whether the bomb blast was carried out by terrorists or it was the outcome of any personal enmity as no one claimed responsibility till filing of this report.

Bajaur is in the grip of violent incidents recently. On June 28, three persons were injured in Charmang tehsil of Bajaur in firing from Afghan side.

The local administration said three persons were busy in labour in Hilalkhel area near the border when they came under gun attack from across the border. The three labourers sustained injuries in the firing.

On May 27, one person was killed and a girl was injured after a mortar shell fired from Afghan side landed in Salarzai tehsil of Bajaur.

The local Tarkhani and Utmankhel tribes of Bajaur strongly condemned mortar attack in the area and demanded the Afghan government to make sure that its land is not used against Pakistan in future. It was not clear whether the mortar shell was fired by militants or the Afghan security forces.

The blast happened in Hilalkhel area of Charmang in Nawagai tehsil. One person, identified as Zakirullah died in the blast, while his brother Saeedullah was injured.