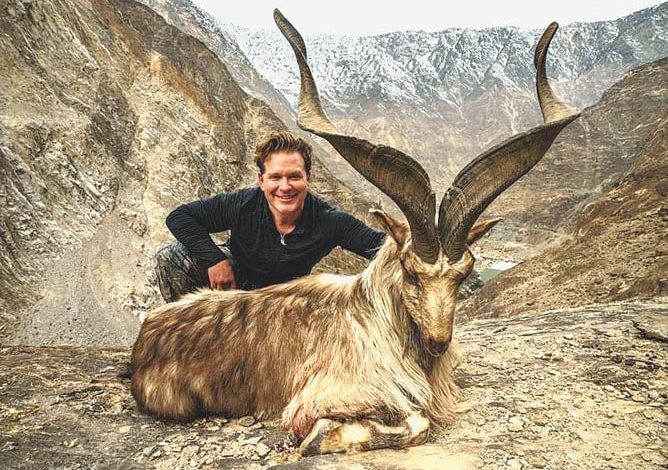 A markhor trophy permit has for the first time in history of trophy hunting programme  fetched the highest bid of US$ 160,250 for a single animal.

Khyber Pakhtunkhwa Wildlife department put up permits for auction on Thursday and local and international trophy hunting enthusiasts took part in the bidding.

A total of for permits were auctioned for US$ 597,200 including the highest bid of US$ 160,250, which was offered by Mehran Safari for hunting a single Markhor in Toshi game reserve in Chitral.

Fourth permit was auctioned for US$ 125.100 to be hunted in Gahiret area of Chitral.

About 80 per cent of the proceeds of auctions are given to local community in trophy hunting areas while 20 per cent goes to government.

This year auction is taking place under the shadow of reports about  steady decline of the animal in the Chitral Gol National Park. Media reporters claimed that the number of declined by 868 in a year.

Maulana Chitrali said that 32 watchers were hired for the protection of wildlife; however, their salaries have been stopped for past four years. He said that non-payment of salaries has reduced the security cover for the park.

Wildlife department is of the view that the animal counting survey could not be completed due to adverse weather while poachers are jailed and fined.