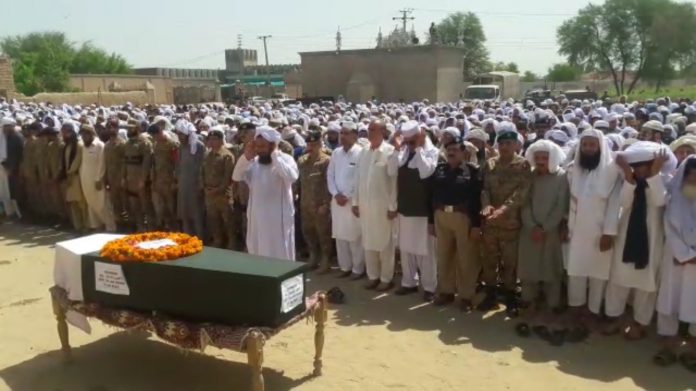 LAKKI MARWAT: The funeral prayer of martyred army captain Arif Ullah was offered by senior military officials and thousands of locals on Saturday. He was laid to rest in his ancestor graveyard in Tajzai area of the district with full military honour.

The GOC of 7 division Asad Nawaz, other senior military officials participated in the funeral prayers. He was laid to rest with full military honour. Shaheed Arifulllah was unmarried. He has left behind his parents, three brothers and four sisters.

The security forces have informed that sepoy Mohsin was also laid to rest with full military honour in his home town in Janranwal. A smartly turned out contingent of Pakistan army presented salute to the martyred soldiers.

The four officials of Pakistan Army were martyred in a blast in Khar Kamar area of North Waziristan Tribal district on Friday. The martyred security men include three officers and a soldier. Four soldiers also sustained injuries when their vehicle was targeted by militants through an improvised explosive device (IED), said an Inter-Services Public Relations (ISPR) statement.

The situation in North Waziristan’s Boya area is tense after the May 26 clash of security forces with protesters.  On Saturday (Today), two soldiers were martyred and three others sustained injuries as a vehicle of the security forces came under a bomb attack in North Waziristan tribal district on Saturday. A few days back, A jawan of Pak army was martyred in a bomb and exchange fire accident in the same area.