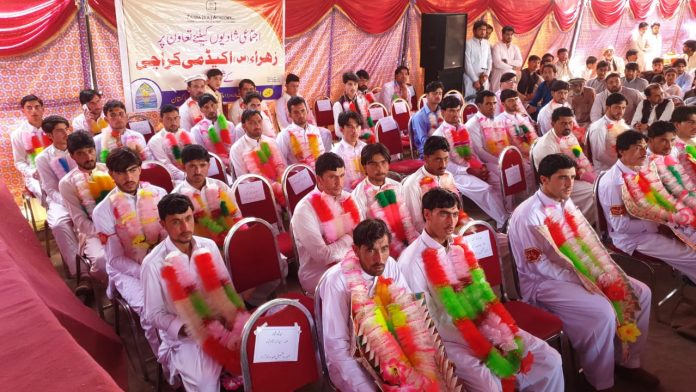 PARACHINAR: A mass wedding ceremony of 60 couples was organised in Parachinar, Kurram tribal district, in which hundreds of tribal notables and relatives of the couples participated.

Allama Syed Iftikhar Hussain, founder of Imam Khamenei Trust, and Brigadier Akhtar Aleem of the Pakistan Army were the chief guests on the occasion. The mass wedding was sponsored by Imam Khamenei Trust and Tehreek-e-Hussaini Parachinar. Allama Iftikhar Hussain, Brigadier Akhtar Aleem, Allama Syed Abid Hussain, Allama Arman Ali, Allama Yousaf Hussain and other speakers said on the occasion that the Trust has sponsored 4,200 weddings of couples who don’t have financial capacity to arrange finances for their marriage. They said that in Parachinar, mass wedding of 199 couples have been arranged so far.

The Ulema and other speakers said Nikah (marriage) is a Sunnah of the Holy Prophet (Peace Be Upon Him). They said Nikah is a sacred institution to walk on the straight path of faith and keep away from vice. They said Nikah guarantees survival of the Ummah through a sacred and neat relationship.

“Almighty Allah opens the doors of mercy upon people who enter Nikha,” they said.

The speakers said there are many parents in our society who are unable to arrange marriage of their adult sons and daughters due to financial and other constraints. They said the Trust is helping such parents and help them getting their sons and daughters enter the sacred institution by sponsoring their weddings.

On the occasion, gifts worth Rs150,000 were given to each newly-wed couple as support to start their married life. The couples were also given the gifts of the Holy Quran.

The newly-wed couples thanked the Trust for their help and said such weddings should be organised in other areas as well to help the poor people. They said they will remember this noble gesture of the Trust for ever.

The Trust organised furniture and dowry for destitute brides and invited their families for lunch.