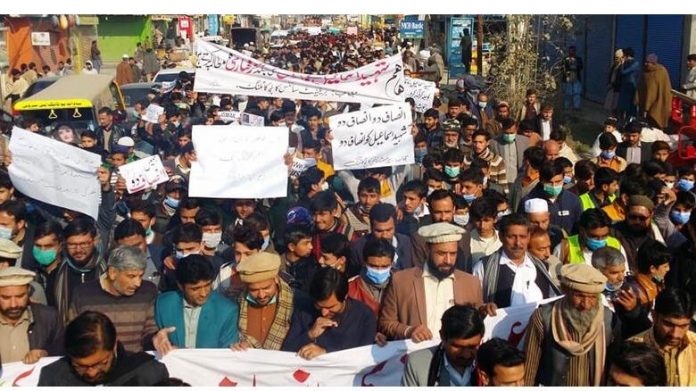 MARDAN: The civil society activists, students, teachers, traders and other people on Saturday held a protest demonstration in Katlang Bazaar of Mardan against the kidnapping and murder of a nine-year-old boy, and demanded immediate arrest of the killers.

Participants of the protest rally were holding banners and placards inscribed with slogans condemning the murder of the boy, Muhammad Ismail. The rally while passing through different bazaars turned into a huge public gathering at Mado Chowk.

The protesters demanded the government to arrest the killers of Muhammad Ismail within three days. They said if it was not done, then the people of Katlang will be compelled to stage a sit-in in the area.

The body of 9-year-old Ismail, who went missing under mysterious circumstances in Katlang, was found on Friday.

The body bearing torture marks was handed over to heirs after post mortem. TNN correspondent reported that Muhammad Ismail, son of Mumtaz, who was a student of third grade, went missing on Thursday evening from Purana Mohallah area of Katlang. The family members searched for him everywhere, but could not find him.

District Police Officer (DPO) Zahidullah, soon after receiving information about the incident, reached the incident site. He visited the victim family, offered Fateha for the departed soul, and assured that the killer will be arrested soon. The DPO said the body of the child had some torture marks. He said police cannot say anything about sexual abuse at this stage. He said further action will be taken in the light of the autopsy report.

The father of the slain child said he has no enmity with anyone. He demanded justice for his son who was killed so mercilessly without any fault.