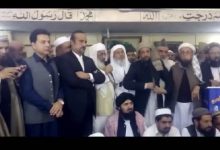 The appointment was made after religious scholars unanimously agreed to appoint Maulana Anwaar, brother of assassinated Maulana Samiul Haq, as mohtamim (head) of the seminary during a dastarbandi.

A large number of ulema and religious scholars including Maulana Ahmad Ludhianvi and Babar Awan were present on this occasion.

The participants offered Fatiha after the dastarbandi ceremony and prayed for the departed soul. They also shed light on various aspects of Maulana Samiul Haq’s life and paid tribute to his services he rendered for Pakistan and religion.