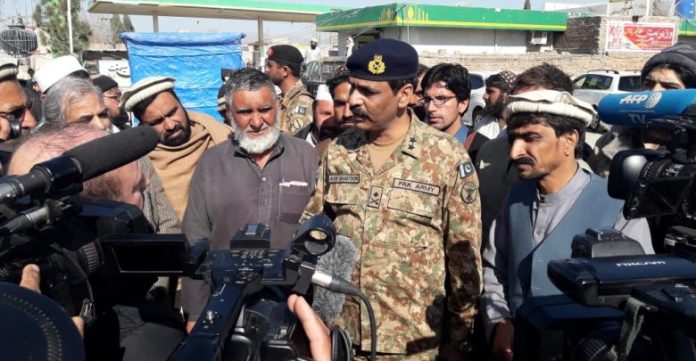 MIRANSHAH: Director General Inter-Services Public Relations (ISPR) Major General Asif Ghafoor on Sunday said the Pakistan Army is fencing the Pak-Afghan border to block the entry of terrorists from the Afghan side.

The military spokesman visited Ghulam Khan, a bordering village in North Waziristan tribal district along with national and foreign journalists and anchorpersons and briefed them about the security situation and border fencing. The DG ISPR said work on about 900 kilometres fence along the Pakistan-Afghanistan border has been completed. He said in initial phase 1,200 kilometres chunk of the total 2,600 kilometres border will be completed which is the most sensitive area from security point of view.

Major General Asif Ghafoor told media persons that 1,200 kilometres portion of the fencing will come in Khyber Pakhtunkhwa and the rest in Balochistan. He told journalists that they can go anywhere in North Waziristan for coverage now and there are no ‘no go areas’.

About the Afghan peace process, the DG ISPR said Pakistan has played its role of bringing the Afghan Taliban to the negotiating table. He said any peace deal will be in great interest of Pakistan. He said with peace in Afghanistan, other militant outfits in the region will be left with no option, but to opt for reconciliation.

The delegation of media persons also visited Miranshah, main town of North Waziristan, where they directly interacted with the local people and traders. The area people appreciated the role of the Pakistan Army in restoring complete peace in the area and informed the delegation about their problems. Some of the traders said they are still waiting for compensation after suffering business damages.

Major General Asif Ghafoor assured the people that all their genuine problems will be resolved. He said work on the development schemes will also be expedited. He said the mobile phone service in the area would be fully resumed in March.