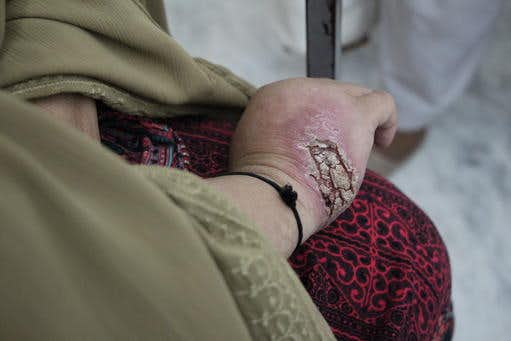 PESHAWAR: Medical teams reached Banda Daud Shah area of Karak amid the outbreak of leishmaniasis disease in the district where the local people appreciated the efforts of Talha Foundation for the providing free treatment and medicines to patients.

Health officials said that during the last two days 500 patients have been provided free treatment at the camp set by the district health department and Talha foundation. “Health authorities are putting in their best efforts to treat the leishmaniasis patients in Karak,” said KP Director General Health Services Dr Arshid Ali.

Leishmaniasis is a disease caused by parasites of the Leishmania type and spread by the bite of certain types of sand flies. The bite mark leaves an ugly scar on the body of the victims and also affect  them with headaches and fever.

Though some cases have been reported from Nowshera, Mardan, and Peshawar, however, Karak district is worst affected. Some 250 cases were reported from Union Council Narai and 460 cases from Latambar area and 700 cases reported from Banda Daud Shah Area. The health officials said that most of the cases of the disease reported in hilly areas of district Karak where the climate is dry.

Dr Sadiq Shah advised the people not to get panicked as Leishmaniasis is not a killing disease. Shah said that government is providing medication and efforts are being made to prevent its spread in the district.

Yesterday, Chief Minister Mahmood Khan and Health Minister Dr Hisham Inamullah Khan also took notice of Leishmania cases in district Karak and ordered the authorities concerned to take steps on a war footing for controlling the outbreak of leishmaniasis disease and providing relief to the victims.

The health department of the province also said that an awareness campaign has also been started in the district to sensitise people to adopt precautionary measures and protect themselves from the illness. The health officials advised people to be careful during morning and evening times by taking precautionary measures like use of lotion and mosquito net to protect themselves from sand flies.