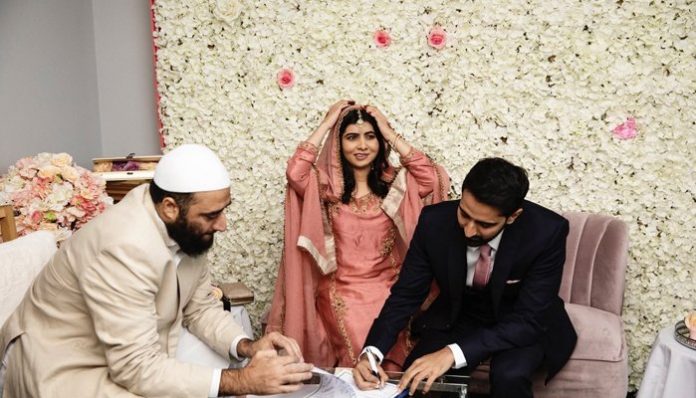 Nobel laureate Malala Yousafzai’s marriage has surprised the social media. Internet is filled with news about marriage. Besides people from are all corners of the world are wishing the couple well.

Though many details about the celebrity marriage have trickled to the media; however,  little is known about the Allam Qaimuddin who solemnized their nikah.

Allama Qaimuddin, belongs to Rustam Khel area of Mardan district and living in Birmingham for past seven years. Allam Qaim is heading an Islamic Center close to Malala’s residence. He is also serving as vice principal at an another educational institution.

Allama Qaimuddin told TNN that Malala’s family had contacted him for performing the nikah about a week earlier. He said that the nikah was performed on the night of November 9 at the residence of Ziauddin Yousafzai.

“Both the families attended the nikah function and were served a sumptuous dinner afterwards,” he said.

However, Allama Qaimudidn was unable to attend the dinner due to his other engagements.

Interestingly, Allam Qaimudidn has also kept the news from his close family members back in Pakistan despite knowing about it a week in advance. Hafiz Muhammad Sadiq, younger brother of Allama Qaimuddin told TNN that they came to know about him performing the nikah, once the pictures of function were shared on media.

“My brother is keeps things to himself and perhaps this is the reason Malala’s family shared such big news with him a week in advance,” he said.

He said that perhaps Malala’s family was sure that my brother would keep their secret.

On November 9, Malala had tweeted news of  her marriage with the Pakistan Cricket Board official Asser Malik.